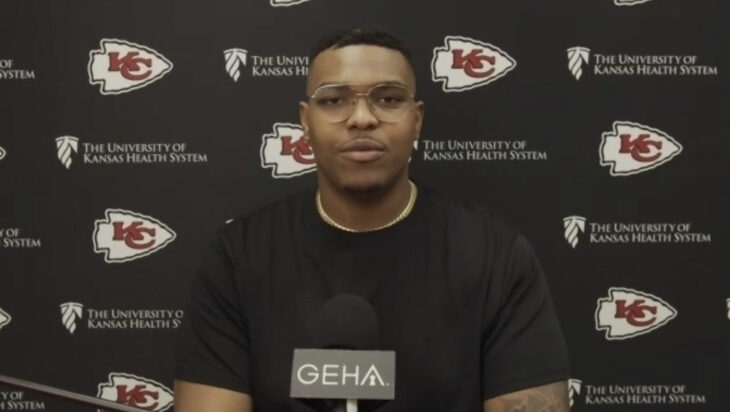 The rebuilding of the Chiefs’ offensive line following Super Bowl LV saw the final piece fall into place Monday with the arrival of Orlando Brown Jr. The smile on Brown’s face belied the seriousness of the mission he accepts when he steps inside the Kansas City locker room for the first time.

It’s his job to protect the blindside of Patrick Mahomes.

Brown’s arrival marks the end of a whirlwind 46 days for general manager Brett Veach in which he rebuilt the Chiefs offensive line. The addition of Brown along with fellow Pro Bowler Joe Thuney on the interior provides the Chiefs with new leadership along the trenches also aimed at instilling an aggressive new attitude.

Veach called Brown “one of the best offensive tackles in the National Football League” in a statement confirming the addition of Brown in a trade with the Baltimore Ravens.

“He’s certainly a special kid. This guy is a Pro Bowl player with tremendous size, quickness and power,” Veach said in the statement. “Not only is he physically talented, but he’s incredibly bright and will fit in well in our offensive line room. We’re thrilled to get him in a Chiefs uniform.”

Brown joined the Ravens in 2018 as a third-round choice (No. 83 overall) from Oklahoma, where he was named Big 12 offensive lineman of the year in both 2016 and 2017. He played in 48 regular-season games with 42 stars and earned Pro Bowl honors the past two seasons.

The 6-foot-8, 345-pound Brown stepping in the starting lineup at right tackle in his seventh NFL game and never looked back. When Ronnie Stanley went down with a season-ending ankle injury in Week 6 last year, Brown moved to the left side and continued his Pro Bowl-caliber play. He didn’t allow a single sack while playing on the left side in 2020 and surrendered just one quarterback hit and 11 hurries.

With Stanley returning from injury and signed to a five-year extension worth up to $112.866 million, Brown was destined to return to the right side of the Ravens line in 2021. He told the club he would prefer a trade to pursue his dream of playing left tackle elsewhere in the NFL.

That dream originated from Brown’s father, Orlando Brown, who spent 13 seasons in the NFL as a right tackle for the Cleveland Browns and the Ravens. He passed away in 2011 at the age of 40, when his son was 15 years old.

“In my household, if you didn’t play left, I’m not going to say he disowned you, but he kind of talked bad to you,” Brown recalled with a laugh.”

For Brown, playing left tackle isn’t about money. It’s about honoring a commitment made to his father.

“Something that he made me promise him was that I was going to be a left tackle and I was going to play in this league for 10-plus years, and be a Hall of Famer,” Brown said. “Something he always expressed to me and my siblings was, ‘Be better than us.’

He was training at the indoor facility of the Oklahoma Sooners in Norman when his agent called with a question: “Are you ready to be a Chief?”

“Honestly I was a little bit overwhelmed and it was a little hard for me to wrap my mind around,” Brown said. “Getting traded to a situation like this, which I think is the best in the league going where I came from. Like I said, it was so overwhelming emotionally, and I’m just so happy, I’m so blessed to be here.”

Brown will make $3.384 million this season in the final year of his rookie contract signed in 2018. The Chiefs hope to sign Brown to a long-term extension, but they may not come until after the season. The club could also choose to use the franchise tag on Brown after the 2021 campaign.

For his part, Brown hopes to earn a place in Kansas City for many years to come.

“I want to be here for a long time, I do,” Brown said. “I’m going to make sure I take care of my part, and that’s handling my business on the football field.”

Even though Brown has accomplished his childhood goal of becoming a left tackle in the NFL, he still has one more objective on his mind.

“I want to best. I want to be the best to play this position in the league,” Brown said. “I’m not there yet, I still got a lot of work to do but I’m going to get there.”