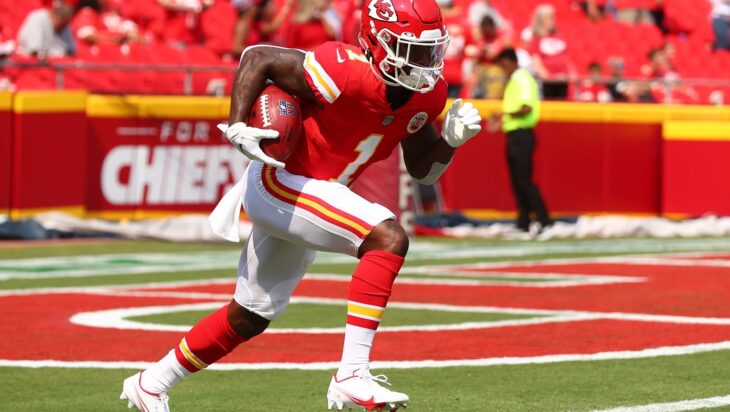 KANSAS CITY, Mo. — Sunday night’s matchup against the Baltimore Ravens marks the fourth-straight season the Chiefs have faced dual-threat quarterback Lamar Jackson, and once again the team reached into its deep supply of speedy athletes and former quarterbacks for help in preparing for the matchup.

Running back Jerick McKinnon took reps at quarterback this week with the Kansas City scout team, providing the starting defense with a reference for the elusive and quick Jackson. Chad Henne took most of the reps at quarterback but McKinnon delivered a glimpse of what the defense must counter on Sunday night.

Safety Juan Thornhill, without mentioning McKinnon by name, hinted on Friday what the Chiefs look to mimic during practice to prepare them for Jackson.

“We might have a guy in there that is just a blazer, trying to find the fastest guy possible,” Thornhill said. “We don’t really about you throwing the football, it’s just trying to run as fast as you can. That’s how you prepare for guys like him.

In 2018 the Chiefs turned to cornerback Tremon Smith to mimic Jackson with fellow cornerback Alex Brown taking reps the following season. Last year quarterback Jordan Ta’amu filled both roles as runner and passer on the scout team prepping the defense to face the Ravens.

McKinnon, like Smith and Brown, possesses a background as a quarterback, albeit with college experience as well. The Atlanta-Journal Constitution tabbed McKinnon as its first-team all-state quarterback as a senior at Sprayberry High School in Marietta, Georgia. He passed for more than 1,500 yards and rushed for more than 1,300 yards in his senior season. McKinnon won a regional championship in the 100 meters for the track team and also competed in the 200 meters, long jump and 4 x 100-meter relay.

At Georgia Southern, McKinnon played quarterback, running back and wide receiver, rushing for 2,867 yards total in his junior and senior season. As a passer, he completed 28 of 66 attempts for 768 yards and 11 touchdowns. He finished his career as the school’s third-leading rusher all-time with 3,899 yards.