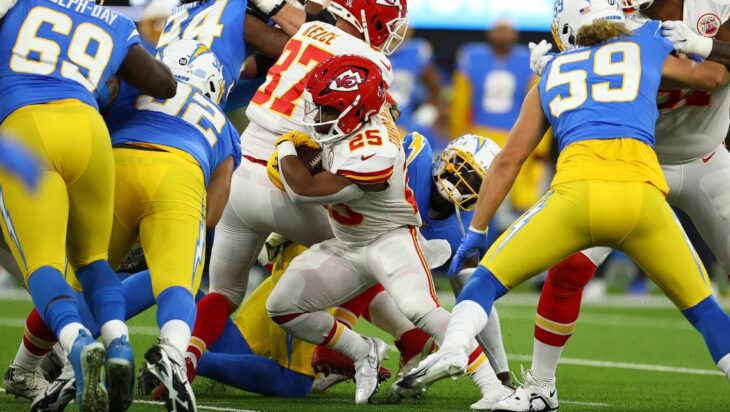 With Mecole Hardman landing on injured reserve this week and JuJu Smith-Schuster out with a concussion, a growing injury list was the last thing the Chiefs needed coming out of their 30-27 win over the Los Angeles Chargers.

Edwards-Helaire initially appears with the most significant injury, with head coach Andy Reid reporting he suffered a high ankle sprain.

“He’s a tough kid but that doesn’t look good,” Reid said. “High ankle sprains with running backs aren’t always the best. We’ll see how he does in his recovery here but he’s pretty tender right now.”

When asked if the injury might force Edwards-Helaire to injured reserve, Reid replied, “I haven’t got that far yet.”

Thornhill left the game with a sprained calf while Toney’s hamstring tightened up. Neither player returned to the contest but it’s too early to know the long-term impact of their injuries.

Watson hurt his hand late in the contest, and Reid suggested he would receive further evaluation once the team returns to Kansas City. “We’ll see where that goes from here,” Reid said.

Toney’s injury takes on greater importance with a rash of injuries hitting the Chiefs’ receiver room. Hardman will miss at least the next three games with an abdominal illness, and it’s unclear when Smith-Schuster will clear the NFL’s concussion protocol. The club elevated receivers Marcus Kemp and Cornell Powell from the practice squad for Sunday night’s game.

General manager Brett Veach also faces a procedural question regarding Kemp. The Chargers game marked his third elevation from the practice squad, which means he must remain on the 53-player roster or be placed on waivers. If the club chooses to place Kemp on waivers and no other team claims he, he becomes a free agent and could re-sign with the Chiefs’ practice squad.

The Chiefs played Sunday night without cornerback Chris Lammons, who is also in the league’s concussion protocol. Rookie cornerback Nazeeh Johnson took his place on the game-day roster against the Chargers. If Lammons and Watson were to miss next week’s game against the Los Angeles Rams, the Chiefs may turn to practice squad defensive backs Dicaprio Bootle or Ugo Amadi for reinforcements.