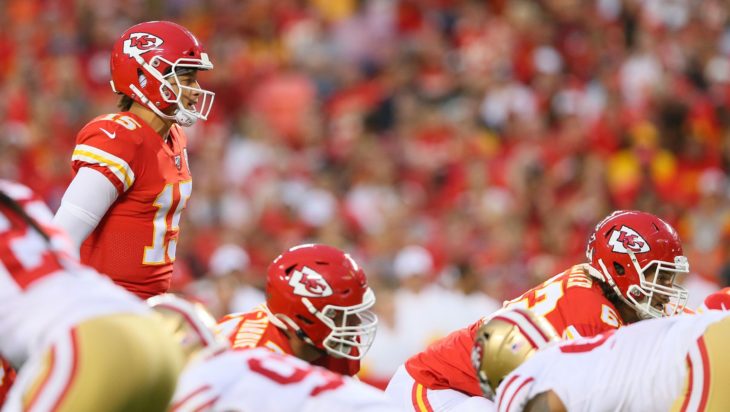 The 49ers run an aggressive 4-3 defense that primarily plays cover 3, man free and limited amounts of cover 2. They rely on their front four to get pressure, rarely sending blitzes, although obvious passing downs will occasionally see a fifth rusher, usually in key moments in the game.

The front four is filled with former first-round picks including Dee Ford, Arik Armstead, DeForest Buckner, and Nick Bosa all selected no later than No. 23 overall. They are all quick, athletic defenders who push the pocket mainly with their quickness and relentless pursuit. Ford should have extra motivation going against the team that traded him away, and Bosa certainly picked up inside knowledge from his brother, Chargers pass rusher Joey Bosa.

The linebackers for San Francisco are all very good, instinctual players who flow aggressively to the ball. Youngsters Fred Warner and Dre Greenlaw rarely come off the field while veteran Kwon Alexander provides experience to the linebacker group.

Richard Sherman is the toast of the 49ers secondary and formerly an instrumental part of the Legion of Boom in Seattle. He is a veteran player who understands how offenses plan to attack him and he gets in good position to defend against most players. Fellow cornerback Ahkello Witherspoon appears on a short leash after getting benched early in the Packers game in favor of second-year corner Emmanuel Moseley. Jimmie Ward and Jaquiski Tartt form a decent tandem at the safety position.

The 49ers defense plays aggressively and the Chiefs can look to slow them down by altering the snap count, running misdirection plays and RPOs and using pre-snap motion to constantly alter what the defense is reading before the snap. They can also look to go up-tempo, getting to the line fast and catching the defense before they line up correctly and wearing them down.

The run game should look to attack the outside with toss plays, split zone looks with a potential for cutbacks, jet sweeps and tap passes. The Chiefs can use quick receiver screens on the edge to get the ball in space in a hurry.

In the passing game, Kansas City should look to get Mahomes on the move, constantly giving the 49ers a different aiming point with their pass rush. When Mahomes rolls out to Bosa’s side, the running back can cut Bosa’s outside leg to prevent him from getting pressure.

The linebackers float in zones with the quarterback’s eyes, allowing Mahomes to look off the linebackers to open up throws behind them in the middle of the field or to allow him to hit his patented no-look pass. Kansas City needs to target Witherspoon, Moseley, and nickelback K’Waun Williams any opportunity they get.

The speed of Tyreek Hill and Mecole Hardman will force the corners, especially Sherman, to play farther off the line of scrimmage, opening up the quick screens on the outside, and allowing the two most dangerous ball carriers on the Chiefs offense to operate in space. Hill and Hardman should be able to win easily against Sherman in these situations. Kansas City can also use running back and tight end screens to cause the 49ers defensive line to tone down the aggressiveness some, giving Mahomes more time in the pocket to dissect the defense.