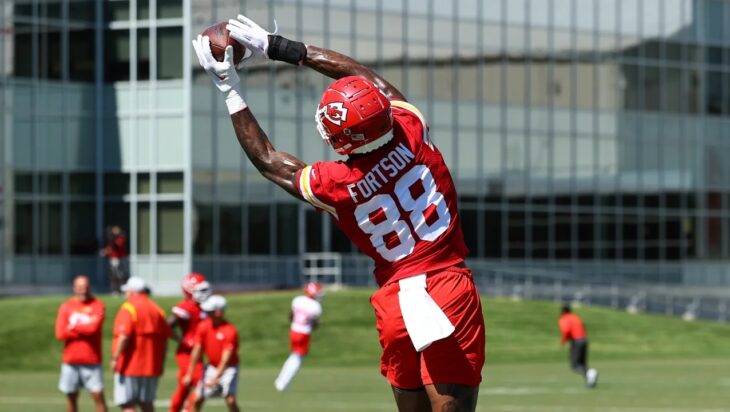 KANSAS CITY, Mo. — Andy Reid put the Chiefs’ players back on the practice field Monday morning after a three-day break, and it’s a squad that appears rested and ready for the grind ahead according to the head coach.

The Chiefs do not submit their first injury report of the season until Wednesday, but names to watch for their participation include defensive ends Carlos Dunlap (Achilles) and Malik Herring (oblique) and linebacker Leo Chenal (concussion protocol).

The only injured mentioned by Reid on Monday regarded tight end Blake Bell, whom he confirmed will be placed on the injured reserve list this week after undergoing hip surgery. The coach says both Noah Gray and Jody Fortson will help fill the void left in the absence of Bell, who played 322 snaps on offense last year and is usually attached to the line of scrimmage in multiple tight end sets.

“Both those two are capable of it,” Reid said. “We’ll mix and match people in. Noah probably did more of it than what Jody did in that particular spot. They’re all going to play, those are good players, so there’s somethings we can do with them mixing personnel in there.”

Reid didn’t immediately identify who would take Bell’s spot on the roster. Speculation remains the club will re-sign linebacker Elijah Lee from the practice squad to replace Bell but delaying the decision keeps the team’s options open in the event of additional injuries or complications before Sunday’s opener against Arizona. Vested veterans such as Lee also have their contract for the season guaranteed if they appear on the Week 1 roster.

“We haven’t made any decisions on how we replace that going forward but we’ll have all that taking care of this week, at least by the end of it,” Reid said.

The Chiefs enter the season with five running backs on the active roster, which includes fullback Mike Burton. While Clyde Edwards-Helaire is the clear starter and rookie Isiah Pacheco is the expected starter at kick returner, it’s unclear if the Chiefs will keep Jerick McKinnon, Ronald Jones or even both active next Sunday at Arizona.

The Chiefs enter the campaign with 10 defensive backs on the roster and safety Juan Thornhill the grizzled veteran starter at age 26. Four rookies are among the group, including 21-year-old cornerback Trent McDuffie, who expects to start as one of the team’s top three corners.

The Chiefs wanted a faster and younger defense in 2022, and Reid sees exactly that in his secondary.

“I like them, I like the speed they play with,” Reid said. “I think Juan has done a good job of kind of helping everybody out back there and managing that from a player’s standpoint back there. But it looks like we’ve got good speed and range and those type of things.”

Along with Thornhill and McDuffie, the Chiefs will lean on a trio of 25-year-olds in the starting lineup with safety Justin Reid and cornerbacks L’Jarius Sneed and Rashad Fenton.

Behind the starting lineup, Reid’s defense will trust a trio of rookies — safety Bryan Cook and cornerbacks Jaylen Watson and Joshua Williams — in both substitution packages and in the case of injuries. The inevitable learning curve doesn’t unnerve Reid.

“There is going to be some hiccups here and there,” he said. “When you have young guys, that’s what happens. I think in the long haul, we’ll be OK with the guys we got there.”

It’s a routine Week 1 schedule for the Chiefs from here on out, with an off day on Tuesday before returning to practice on Wednesday. The club will travel to Phoenix on Saturday ahead of the showdown with the Cardinals on Sunday, Sept. 11 kicking off at 3:25 p.m.