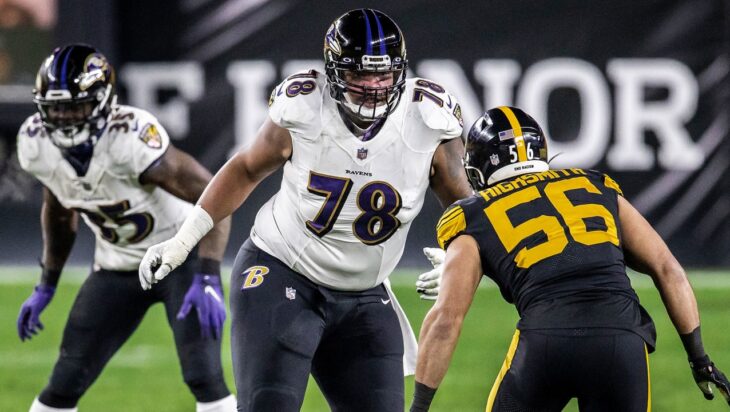 Chiefs general manager Brett Veach weighed very carefully the benefits of spending the No. 31 selection in Thursday’s first round of the 2021 NFL Draft on a left tackle. Instead, he found what his team needed in Orlando Brown Jr., sending the club’s first-round pick to Baltimore in exchange for the 24-year-old Pro Bowler.

“These guys that you’re looking at, a lot of these guys you like and they have developmental upside but we’re certainly built to win and built to win now, and to have a plug-and-play guy is very hard,” Veach said. “That’s why we couldn’t pass up that opportunity.”

Veach didn’t know what options might be available at No. 31. As Thursday’s opening round came to a close, players such as Oklahoma State’s Teven Jenkins, Texas’ tackle Samuel Cosmi and Notre Dame’s Liam Eichenberg where just some of the names remaining available from which to choose. But Veach saw what he needed in Brown, who joins an offensive looking to replace the leadership void left by the departures of Eric Fisher and Mitchell Schwarz.

“Losing some guys like Fisher and Schwartz, it’s one thing to replace the athlete but also the type of people these guys were and what they bring into the locker room,” Veach said. “You talk about Orlando, and he has all those attributes you look for, the size, the length, the mental toughness, the durability, the leadership. Hard to find that.”

Indeed Veach did his due diligence on Brown, reaching out to people who worked with Brown since he entered the league in 2018 as a third-round selection from Oklahoma.

“It was very consistent with what we had on him coming out (of college),” Veach explained, “Just a high-character guy, really smart, loves the process, all the things we talk about when we talk about the checkboxes for these offensive linemen. Durable, the guy doesn’t miss any snaps, he’s smart, he’s tough, he loves the process and that’s an infectious trait.”

Brown has one year remaining on his rookie contract, which will pay him $3.384 million this season. Veach said he had a dialogue with both Brown and his representation before the trade regarding a long-term extension. Right now, however, the general manager said neither side is in a hurry to get a new deal done and both are willing to wait until the offseason. The Chiefs also have the luxury of using the franchise tag to retain Brown for the 2022 season.

“And as well all know the cap situation will probably increase and there will be more flexibility and we can get more creative,” Veach said. “Whether that be this year or next year, we have some time but I think the important thing for us was there was open dialogue and both parties understood that if it couldn’t get done we’d go into the season and try to knock it out.”