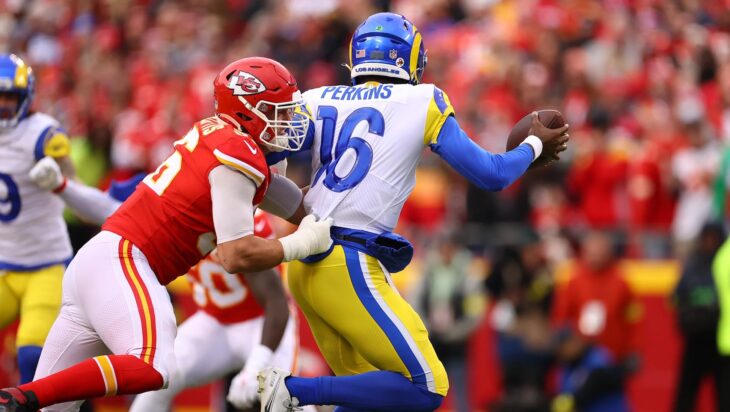 KANSAS CITY, Mo. — A mere five weeks ago, the Chiefs’ pass rush found itself right in the middle of the pick, tied for 14th in the NFL in bringing opposing quarterbacks to the ground.

After Sunday’s 26-10 win over the Los Angeles Rams — and not mention five weeks and five wins later — the Chiefs’ defense ranks No. 5 with 35 sacks. The 242 yards they’ve sent opposing offenses backward ranks best in the AFC.

The Chiefs’ pass rush was at it again against the Rams with Chris Jones, George Karlaftis and safety Bryan Cook each collecting a sack for a total of 24 yards. Those were the first NFL sacks for rookies Karlaftis and Cook, while Jones picked up sack No. 10 on the season, marking the second double-digit sack season of his career.

Karlaftis has come close several times to landing his first NFL sack –he even shared a sack with Frank Clark against Las Vegas in Week 5.

But as Karlaftis said himself, “Close don’t count.” His first sack felt “(darn) good,” and it couldn’t have come at a better time for the Chiefs.

After Kansas City forced the Rams to a three-and-out on their opening possession, fellow rookie Skyy Moore muffed the ensuing punt, and the Rams recovered at the Chiefs’ 43-yard line.

As the Rams lined up on first-and-10, Karlaftis saw something familiar in their formation.

“We actually saw that exact same play, I saw it in practice,” Karlaftis said. “I think it’s a designed screen, but I bit on the running back. We had the same call for the same offensive play, and in practice, I messed up, I bit on the back, and was late to the quarterback.

“Here I was like all right, I know what they’re about to do.”

Karlaftis and fellow edge rusher Carlos Dunlap both cleared their blocks into the backfield. Running back Cam Akers took on Dunlap but Karlaftis ignored the running back and pursued quarterback Bryce Perkins, dropping him for a 7-yard loss before the play could develop.

“We responded, I think we’ve been doing a solid job of that as of late,” Karlaftis said. “It was huge for our defense, kind of momentum of the game.”

The Chiefs’ pass rush has certainly been timely and hot of late, racking up 21 sacks during the team’s five-game winning streak. Mike Danna, who has been productive both on the edge and as an inside rusher on passing downs, said the defensive line group is starting to come together.

“We’re just coordinating our rushes, playing together as a unit, playing for the brother beside you,” Danna said. “All that stuff makes you play hard when you know you’ve got somebody besides you that’s going to ride for you, die for you and leave it all out on the field.”

The group also knows that one of the season’s biggest challenges awaits next Sunday in Cincinnati, where the Chiefs hope to exorcise the demons of two losses to the Bengals last season, including the disappointing loss in the AFC Championship game.

Defensive end Frank Clark says the Bengals still play with a chip on their shoulder.

“We’ve got to focus,” Clark said. “We’ve got to have a focused week of practice. Enjoy this 24-hour rule, enjoy it, get over it and get back to work. We got Monday off, Tuesday we’ve got to come in with a different mindset. We’re coming in, and we’re playing another team that was the Super Bowl runner-up last year.”

Jones gets the bag

Jones picked up sack No. 10 on the season against the Rams, nabbing himself a $1.25 million incentive for 10 sacks in a season.

Jones is scheduled to make $22.374 million this year in salary and bonuses. While earning the bonus feels good, Jones said reaching double-digit sacks isn’t the driving factor for him right now.

When Jones reached a career-best 15.5 sacks in the 2018 season, he set an NFL record with at least one sack in 11 consecutive games. He currently has at least one-half of a sack in each of his last six games, tied for the third-longest such streak in franchise history.

He shares credit for his current streak with his teammates as well as defensive line coach Joe Cullen and defensive coordinator Steve Spagnuolo.

Danna said teammates were well aware that Jones was closing in on 10 sacks for the season and earning his incentive bonus.