Thursday sets the stage for arguably the Chiefs’ biggest early season game since the Broncos traveled to Kansas City for a Thursday night affair in week two of 2015. The Chiefs would fall in that game 31-24 to the eventual Super Bowl champions. Kansas City would start the season 1-5 before rattling off 11 consecutive wins, including their first playoff win in more than two decades.

Fast forward two years and the Chiefs get a great opportunity to show the national media, football fans across the country and their fans how close this roster is to attain that elusive championship. Andy Reid and Bill Belichick are arguably two of the best coaches in the league at exploiting the other teams weaknesses in scheme and player technique. Here are some key points to remember for the Thursday night match-up. 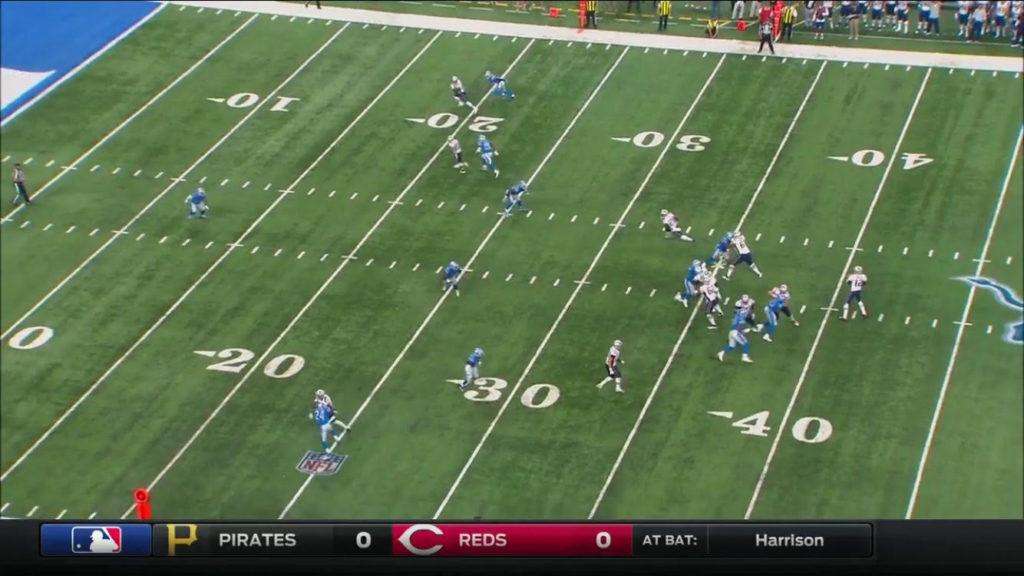 The Patriots like to run their no huddle offense after an explosive play (20 yards or more) or if the opposing offense goes three and out. New England likes to keep the opposing defense from making adjustments in this personnel packages. The strategy also forces the opponent to develop sloppiness in their technique and wear down by the 4th quarter. Sustainable drives by the offense and limiting explosive plays will be big. 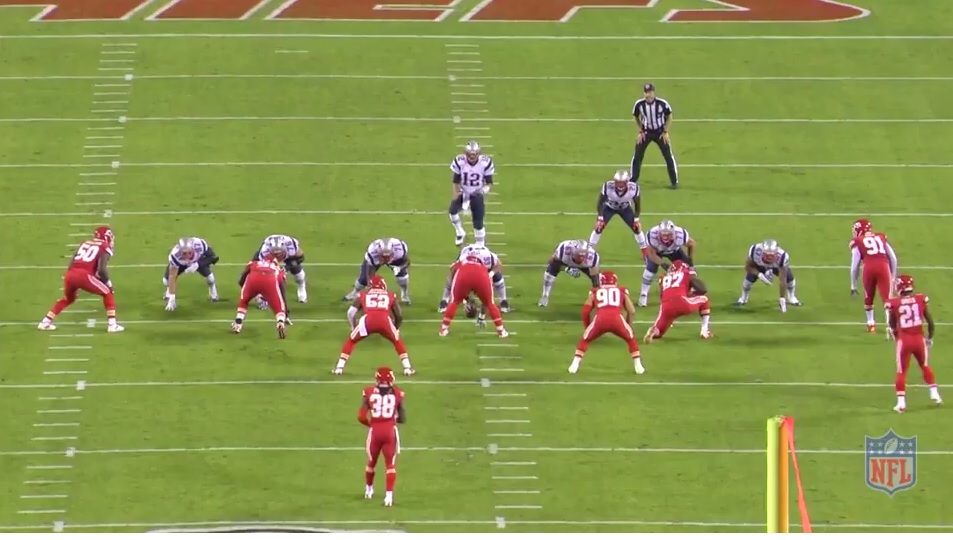 Bob Sutton utilized the five-man front in the Chiefs initial battle on Monday Night Football in 2014. Justin Houston and Tamba Hali were aligned in wide nine tech. Jaye Howard and Allen Bailey were in three or five techs depending on the formation and Dontari Poe was in a zero tech. Sutton and the front five made the pocket uncomfortable for Brady and minimized their effectiveness in the run.

It also gave them versatility in their blitzes, games and twist. The Chiefs have an effective six-man rotation on the defensive line to keep this pressure up for four quarters. It stands as the best option to disrupt the rhythm of Brady and his receivers while challenging a very good offensive line. 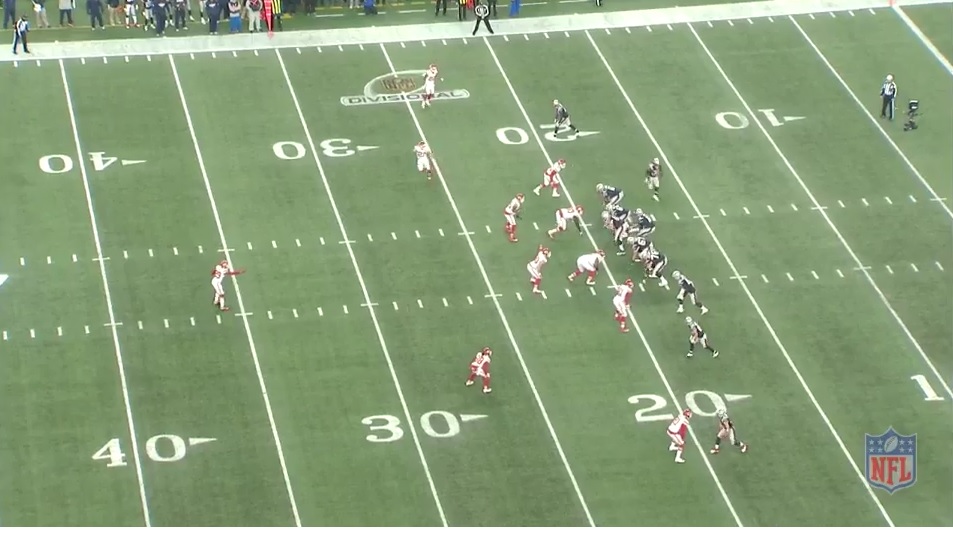 When the Chiefs utilized their four-man front in the 2015 playoff game, Brady consistently found time to survey the field unless a blitz came through the A gaps.

Brady’s accuracy looked in mid-season form during their week three preseason game against the Lions and a lot of it is due to his footwork and a clean pocket allowing him to stay on his spot rather than rush his throws.

Bill Belichick’s defense will likely attack one of the Chiefs weaknesses right now along their interior offensive line. Bryan Witzmann has trouble with defenders getting into his chest because of how high his shoulder pads are out of his stance. He gets pushed into the backfield at times and forces the running to go wider. 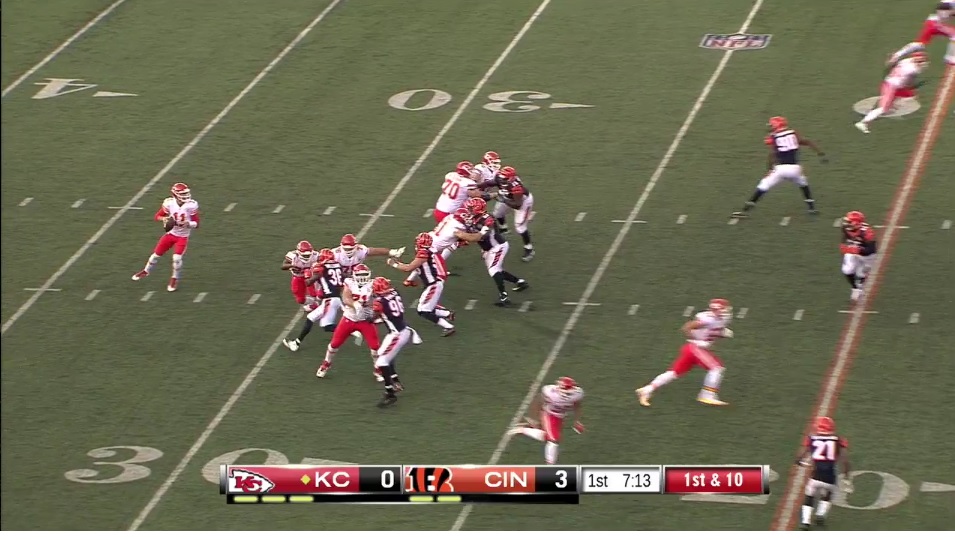 Laurent Duvernay-Tardif battles at times with beating a defender to the spot and will struggle at sticking with his initial pass protection assignment because of a delayed blitz, loop or game. Mitch Morse at times struggles with the defensive tackle head up on him.

The Patriots also tested the Chiefs in their playoff battle with creative overload blitzes away from back side protection, which flushed Alex Smith from the pocket. 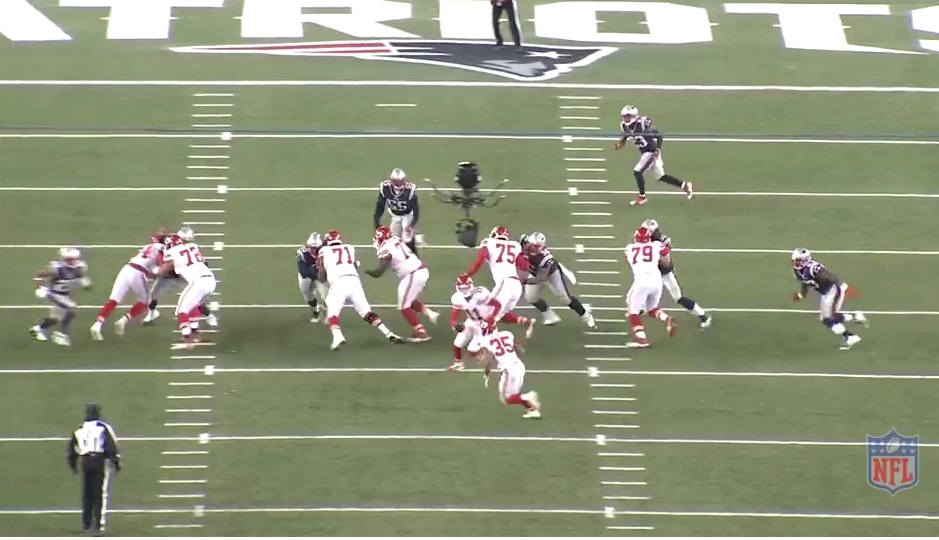 The Chiefs run game on offense will likely see some well timed run blitzes. New England ran some of those blitzes in the playoff game. Sometimes it was a corner blitz coming off the edge or a blitzes crashing down on the backside.

The Bengals and Seahawks were both effective in the preseason with these blitzes and the Patriots will likely try them as well. A way to counter some of those run blitzes will be with the ghost motion from Tyreek Hill and De’Anthony Thomas on some of their stretch plays, along with effective blocking for some cutback lanes. 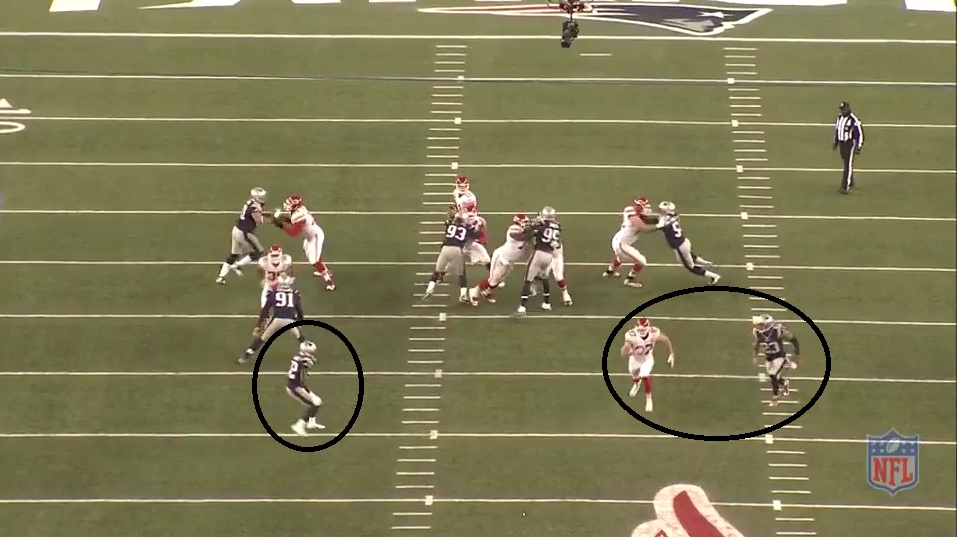 The Patriots want to take away the biggest threats that make an offense tick. On Monday Night Football in 2014, the Patriots always had two defenders accounting for Jamaal Charles’ every move. Reid was able to utilize shifts, misdirection and Travis Kelce to counter the Patriots decision.

When the 2015 playoff game arrived the Patriots challenged the Chiefs offense to step up by taking away the run game with blitzes and bracketing Kelce on a majority of plays. Jason Avant and Albert Wilson both answered the call at times but the team needed others to step up.

The Patriots will likely force Smith to challenge them deep. They will want to take Kelce and Tyreek Hill out with bracket coverage. And expect the Patriots to roll a safety over top with a cornerback in off coverage to keep themselves from being beat deep.

New England will want the Chiefs to beat them with Smith’s deep ball, Chris Conley, Wilson, Demetrius Harris and the interior offensive line. Kansas City can counter this two ways.

The first is utilizing bunch coverage with Kelce and Hill together or both of them on opposite sides of the field. 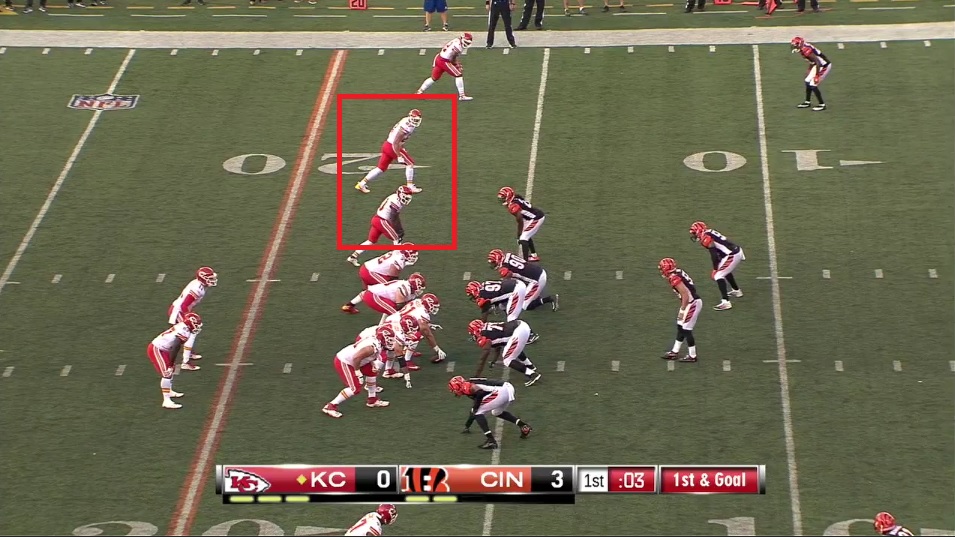 The second way is to align them together as decoys in the trips formation to take advantage of multiple one-on-one match-ups elsewhere or to get either one of their play-makers open.

The atmosphere will be electric on Thursday night and so can the Chiefs if they can effectively execute the points above.