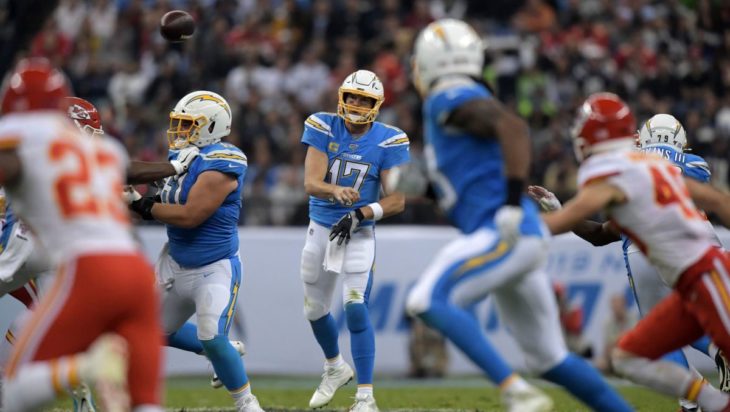 The Chargers made some changes to their offense since their last meeting with the Chiefs in November. They still employ a zone-heavy running scheme with Melvin Gordon as the main back and Austin Ekeler as the change-of-pace and third-down back. Los Angeles started to use more 21 personnel (two running backs, one tight end) to take advantage of having both of their very talented running backs on the field at the same time.

The Chargers will work reverses into their regular rotation of plays throughout the game. They use motion to distract the defense and take defenders away from the play or get a lead blocker out in front of the runner.

The passing game splits between players operating at different levels of the field. Running backs control a majority of the underneath work, getting targeted on check downs, screens and short crossing routes. Tight end Hunter Henry and receiver Keenan Allen handle most of the work in the intermediate areas on digs, outs, over routes and slants. The Chargers use receiver Mike Williams excellent ability to play above the rim to win on deep, jump ball routes.

The offensive line serves as the Achilles’ heel of the Chargers offense. The entire line struggles to pick up twists. Neither tackle handles speed nor power very well. The right guard and tackle basically become turnstiles if they can’t get their hands on the defender. The right guard fails to consistently anchor against power bull rushes, leaving him backing up into quarterback Philip Rivers far too often. The tight ends don’t offer much help in the way of chip blocks either.

Los Angeles lacks a speed element in the passing game. Allen remains a great possession receiver, using his route running and shiftiness to get open. He doesn’t have the speed, however, to strike fear in the heart of a defensive back lined up across from him.

Williams does most of his work downfield, but doesn’t run away from anyone and relies on winning 50-50 jump balls. Henry is a dangerous weapon in the open field, but has developed a bad case of the drops when trying to catch contested passes.

The key to shutting down the Chargers on offense rests with making Rivers uncomfortable in the pocket. The Swiss cheese offensive line makes it a question of how much pressure the Chiefs can generate.

As the hits pile up, the likelihood of mistakes skyrocket. Rivers forces passes into tight coverage, which hasn’t worked out in his favor much this year, resulting in 18 interceptions this season. Rivers seems to have a blind spot for defenders playing a robber technique on the backside of trips formations. Safety Tyrann Mathieu and cornerback Kendall Fuller have a really good chance to get a takeaway in this game if they get work as a robber.

Another poor outing from Rivers could leave the Chargers turning to backup Tyrod Taylor for some snaps. Taylor plays a whole different style of quarterback, using his legs to escape the pocket in extending plays or pick up rushing yards. If the Chargers turn to Taylor, the Chiefs need to deploy a safety as a spy to match the speed of Taylor.