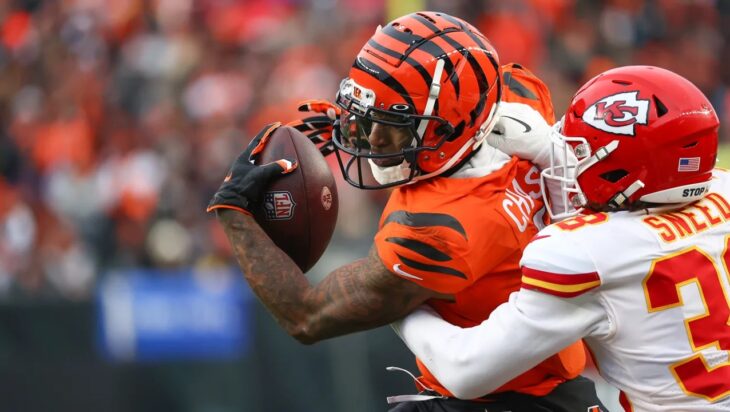 The Chiefs seemed on the verge of taking another step toward the No. 1 seed in the AFC playoffs at halftime of their game at Cincinnati, leading the Bengals 28-17. But a series of missteps allowed the Bengals to escape with a victory while head coach Andy Reid finds his team looking up in the standings at the Tennessee Titans.

“We stalled the first couple of series on the offensive side of the ball in third quarter and then we had too many big plays on the defensive side,” Reid said after the game.

Safety Tyrann Mathieu gave credit to the Bengals for being well prepared but felt his own squad didn’t do enough to get off the field at times.

“This is a response-driven league, and I just didn’t think we responded well enough today,” safety Tyrann Mathieu said.

Here are five key areas where breakdowns by the Chiefs spelled disaster against the Bengals.

Defensive coordinator Steve Spagnuolo during the week compared Bengals quarterback Joe Burrow to a “young Tom Brady.” It might have been a more apt comparison to label Bengals wide receiver Ja’Marr Chase a young Randy Moss.

The rookie of the year candidate caught 11 passes for 266 yards and three touchdowns while nearly single-handedly dismantling a Chiefs defense that had allowed an average of just 12.3 points per game over their last seven contests.

Chase started his demolition of the Chiefs in the first half with five catches for 111 yards and two scores. Yet despite that performance, the Kansas City defense continued primarily playing single coverage against Chase rather than use double teams and bracket coverage in the second half.

Reid avoided the subject during his postgame press conference when asked if the coaching staff considered giving Chase more attention in the second half.

“Yeah, I’m not going to cover that right there,” Reid said. “I mean we obviously knew he was playing well.”

Mathieu felt his teammates fought hard but didn’t have an answer for Chase.

“A lot of balls he caught today, we could have been better as far as our angles to the completion point,” Mathieu said. “I didn’t think we tackled as well as we’ve been tackling the last couple of months and any time you’re playing against a player like that, they’re going to expose you.”

The Chiefs were flagged 10 times for 83 yards but none were more costly than a trio of flags that took points off the board.

The Bengals pulled within 28-17 with 46 seconds left in the first half. Returner Byron Pringle returned the ensuing kickoff 89 yards for a touchdown but a holding call on safety Zayne Anderson brought the play back to the Kansas City 16-yard line. Patrick Mahomes and Tyreek Hill nearly combined for a deep bomb that would have put the Chiefs in field goal range but Hill was unable to hold on to the ball.

With 2:21 remaining in the third quarter, the Chiefs faced a third-and-2 from the Bengals 41-yard line, arguable within field goal range for Harrison Butker. Mahomes connected with tight end Blake Bell for 11 yards and an apparent first down but Andrew Wylie drew a flag for holding that sent the Chiefs back 10 yards. The Bengals declined an illegal motion penalty on Hill on the same play.

While the calls on Anderson, Hill and Wylie weren’t controversial, other flags throughout the day prompted criticism of the officials. The Chiefs were also forced to use one of their challenges when officials incorrectly spotted the ball on a Bengals’ third-down attempt. Reid appeared animated on the sidelines on multiple occasions following debatable calls, and he tried to hold his tongue during his postgame press conference.

“I’d like to comment on each one (of the penalties) but I don’t want to be fined,” Reid said.

Immediately after the penalties on Wylie and Hill wiped out the third-down conversion, the Chiefs faced a third-and-12 from their own 49-yard line. Hill lined up in the slot and headed down the middle but a collision sent him spilling to the ground.

“He probably would have been wide open,” Mahomes said. “So we didn’t get the first down there. Kind of stuff like that the entire second half.”

Mahomes scrambled after Hill went down and eventually shoveled the ball to tight end Noah Gray for a 6-yard gain. Facing a fourth-and-6 from the Cincinnati 45-yard line, Reid opted to punt.

The Chiefs hoped to pin the Bengals deep in their own territory but Tommy Townsend netted just 31 yards on the kick to the Cincinnati 14. The Bengals took eight plays in marching 86 yards — assisted by two flags on cornerback L’Jarius Sneed for 36 yards — in taking their first lead of the game at 31-28.

With the game tied at 31-31 and just under 4 minutes remaining, defensive tackle Chris Jones appeared to take the air out of the Bengals’ drive by sacking Burrow for a 7-yard loss at the Kansas City 41-yard line. An incompletion left the Bengals facing a third-and-27 and teetering on the edge of field goal range.

That’s where Mathieu said his team made a miscalculation.

“I think in our mind, we were playing for those guys to hopefully play for a field goal and kind of play into our hands but they had another game plan in mind, and it worked and they got us,” Mathieu said.

The Chiefs brought an all-out zero blitz but Burrow and the Bengals weren’t playing for a field goal. Burrow tossed a jump ball down sideline toward Chase, who hauled in the catch for 30 yards despite a heroic effort from cornerback Charvarius Ward to breakup the pass.

“Well with hindsight now, I mean, we probably could have helped out a little bit more on Chase,” Reid said. “But that’s – we put our guys in that position to make a play, to hopefully get to the quarterback and keep them out of field goal range, and so it didn’t work out.”

Choosing to try and keep the Bengals out of the end zone with 2 minutes remaining in the game was a defensible decision by Reid but it ended up disastrously backfiring for the Chiefs.

After running back Joe Mixon picked up first-and-goal for the Bengals at the 1-yard line, the Chiefs could have allowed the Bengals to score an uncontested touchdown. That would have provided the Bengals with a 38-31 lead but it also would have given Mahomes and the offense nearly 2 minutes to respond.

Instead the Chiefs defense hunkered down and came up with three stops while burning their remaining two timeouts. Bengals head coach Zac Taylor made equally controversial decision to go for it on fourth-and-goal. Burrow’s pass to Tyler Boyd was broken up but Sneed drew another flag for illegal use of hands.

With a new set of downs, the Bengals opted to run the clock down to 2 seconds before Evan McPherson came on for a game-winning 20-yard field goal.

When asked about the decision to mount a goal-line stand, Reid seemed to indicate the Chiefs didn’t consider letting the Bengals score intentional until they picked up the new set of downs with 50 seconds left to play.

The Chiefs may still have gone down to defeat but they would it would have been with Mahomes on the field and the ball in their hands. They also could have extended the game by forcing overtime.