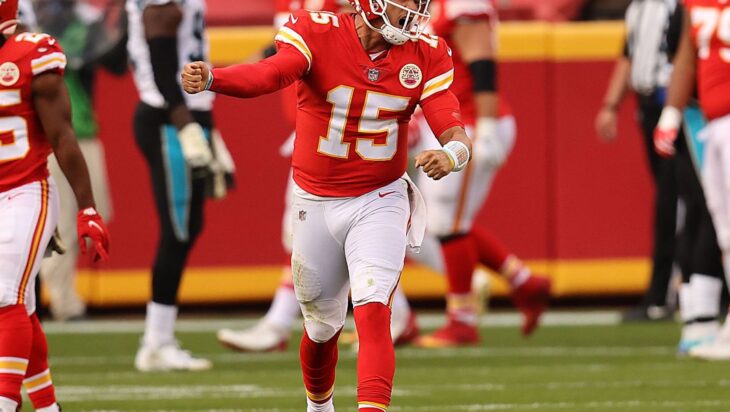 In most workplaces goofing off might serve as a stress reliever at best or a colossal waste of time at worst. On the practice field of the Kansas City Chiefs, leisure time activity might just result in a touchdown in an NFL game.

Case in point: the newest wrinkle in the Chiefs’ fast-break offense, the quarterback in motion, originating from Patrick Mahomes messing around on the sideline during practice with his teammates.

“You see me in training camp and before practice, taking snaps with centers and so obviously I’m doing formations and stuff like that, and I started going in motion,” Mahomes explained.

The Chiefs offense thrives on pre-snap motion. Receivers, tight ends and running backs frequently move before the snap to create mismatches and confusion. Staples of the playbook are jet sweeps with a receiver in motion, and counter runs where a ballcarrier steps one direction before cutting back in the opposite direction.

So why can’t the quarterback do the same thing, Mahomes mused.

“After that, I had to go to Tom Melvin, our tight ends coach, and ask if it was legal for me to be in motion, and he said as long as everyone was set,” he said.

When the Chiefs special teams unit takes the field for practice, Mahomes and other offensive starters such as Tyreek Hill and Travis Kelce have time off on the sidelines. Oftentimes players will go to the secondary practice field. One day a few weeks ago, Mahomes called Hill over to him.

But Mahomes was undeterred. He continued working on the play during special teams periods with Kelce and Hill, testing out different variations of the play to see what would work and what wouldn’t.

There was only one more person to convince: head coach Andy Reid. Mahomes started throwing out little hints to Reid that they need to try it out in practice. Ever the mad scientist himself, Reid decided to give it a test drive. The players came up with a name for the play, “Ferrari Right.” Mahomes became the proud owner of a Ferrari 812 Superfast this summer after signing a 12-year, $503 million contract extension.

“He’d been doing it, and it looked good, so if it looks good, let’s try it,” Reid said. “So we tried it. He goes down there during special teams, and he was messing around with a couple of things. So we put it in, and it worked.”

Whether it’s Hungry Pig Right, the Tebow Pop Pass, Smoked Sausage or Rolex, Reid loves gadget plays for many different reasons. First and foremost his creative inspirations often work, but he also values them for the run they provide players in practice.

“There’s a time when we’re kind of doing like a walkthrough for the defense, in that walkthrough, he kind of gives us a little opportunities to do little stuff that we can try out,” Mahomes said. “I did it and I think he liked how it looked there. You have to show him, he has to see proof of it working in a live situation before he’s going to put it in there.”

Hill was pretty stunned too.

“The crazy thing is I really didn’t think that play was going to be put in,” Hill said. “But it’s Patrick Mahomes, so you know.”

The play worked flawlessly, Mahomes initially set up in the shotgun, then stepped to his right, lining up as essentially a running back in a two-back set, only without a quarterback. He motioned to his left and received the snap on the run from center Austin Reiter.

The Panthers defense bit hard on the motion, and followed Clyde Edwards-Helaire out of the backfield to the left. Mahomes then reversed course, running a bootleg to the right side. He delivered a pinpoint throw on the run to Demarcus Robinson in the back of the end zone. Cornerback Rasul Douglas took a step toward the line of scrimmage following the motion to the left, allowing Robinson to slip past him and settle into the middle of the field vacated by the Panthers secondary.

“It turned out to be a great play,” Hill said. “(Mahomes’) creativity, just him being around coach Reid, coach Reid is wearing off on Pat, just the creativity and the ideas that both of them have and collaborate.”

With Ferrari Right out of the garage, Mahomes and Reid a new project, and Hill can’t wait to see what happens next.

“It’s just crazy,” he said. “I know we’re going to have something fun after the bye week. I’m just looking forward to it.”