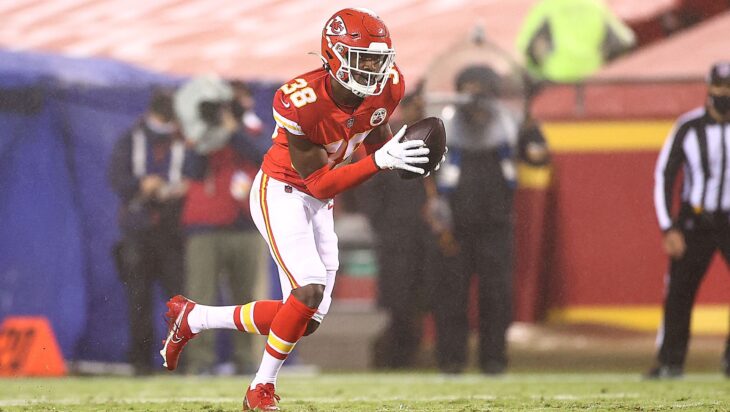 KANSAS CITY, Mo. – A handful of friendly faces returned to the practice field for the Chiefs on Wednesday as the club continues returning to full strength ahead of Sunday’s contest against the Carolina Panthers, the final game before the team’s bye in Week 10.

The Chiefs made two official moves Wednesday, restoring fullback Anthony Sherman returned to the active roster from the COVID-19 reserve list. No corresponding move was required to make room. The club dealt running back DeAndre Washington to Miami ahead of Tuesday’s trade deadline, freeing up a roster spot for Sherman.

The team also declared cornerback L’Jarius Sneed as designated to return from injured reserve. The rookie missed the past five games with a fractured collarbone sustained in Week 3 against the Baltimore Ravens.

The Chiefs are eager to see Sneed back in the rotation at cornerback after his quick start to his rookie campaign. Sneed started the team’s first three games of the season, interception passes against Houston and the Los Angeles Chargers while breaking up three others and totaling 11 tackles. He injured his collarbone after landing hard on the ground in a diving attempt to intercept an overthrown pass from Ravens quarterback Lamar Jackson.

The designation to return move allows Sneed to practice with the Chiefs for up to 21 days before he must return to the active roster. When defensive linemen Khalen Saunders and Mike Danna recently returned from injured reserve, however, the club activated them to the 53-man roster during their first week of practice.

Kansas City could also get reinforcements along the offensive line next week. The club has six more days before restoring Martinas Rankin to the active roster or let him remain on the physically unable to perform list for the remainder of the season.

“I think it’s great the way this is set up that he’s got that time to get himself ready to go,” Reid said. “He had no camp and this is the first football he’s had the last couple weeks. It’s good for him to get in there, banging around a little bit on the scout team.”