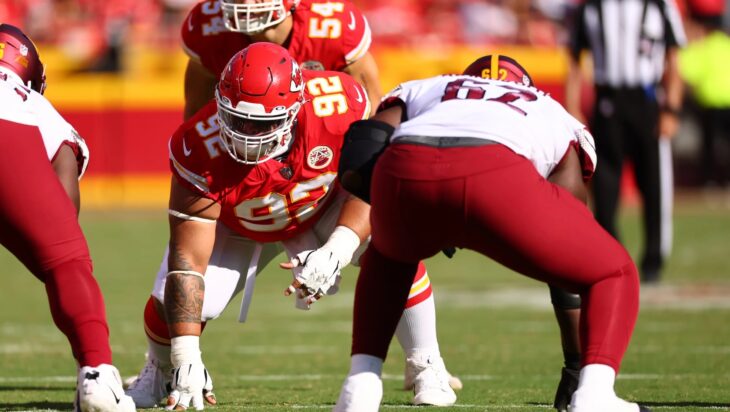 KANSAS CITY, Mo. — The Chiefs relied on familiarity in building their initial practice squad of the 2022 season, signing 13 players who were released or waived on Tuesday during the club’s roster reduction to 53 players.

The first 14 players signed to the practice squad are:

General manager Brett Veach says the high retention rate of players with the team in training camp reflects a growing trend around the league of teams sticking with players they know. He mentioned his personnel group reached out to players on the waiver wire who were staying with their prior clubs.

“I think there’s a level of comfort,” Veach said. “I think you’ll also see different waves I think early on. I think with the first game being right around the corner and if something did happen to a player these guys are ready to go right away and then you’ll have another wave and you’ll see this over the wire throughout the year.”

The practice squad rules for 2022 allow teams to carry 16 players on the squad with no limit on the number of players who have not accrued at least nine games in an NFL season. Teams can also have up to six players with no limitations on their amount of experience. The Chiefs signed their full allotment of six players in that group with Fountain, Kamara, Lee, Reiter, Shelton and Stallworth.

“I think it’s just a good blend,” Veach said. “I think it helps teams stay healthier. I think it allows players who are hurt to do the rehab the right way and to not have to rush to get back on the field to protect some players that might get exposed to waivers.”

The only newcomer to the group of 14 players the club announced Wednesday afternoon is Oladokun, a seventh-round pick for Pittsburgh in this year’s draft who had stints at South Florida and Samford before finishing his college career at South Dakota State.

Oladokun, who turns 25 on Sept. 3, was a redshirt at South Florida in 2016 and spent two seasons in a backup role before transferring to Samford in 2019. He started eight games that season, completing 62% of his passes while tallying 2,058 passing yards with 18 touchdowns and seven interceptions. He also rushed for 491 yards and a team-leading eight touchdowns.

After losing his starting job in Samford’s pandemic-delayed 2021 spring season, Oladokun transferred to South Dakota State, where he again completed 62% of his passes while totaling 3,164 passing yards with 25 touchdowns and seven interceptions. He led the Jackrabbits to the Division I FCS semifinals and earned a spot in the NFLPA Collegiate Bowl.

Another familiar name also appears headed to the practice squad. Former Missouri tight end Kendall Blanton agreed to a practice squad deal with the Chiefs, as first reported by WDAF-TV’s Harold Kuntz. Blanton expects to sign with the club upon completion of his physical.

The 26-year-old Blanton is a native of Blue Springs, Mo., and the son of former linebacker Jerry Blanton, who spent seven seasons with the Chiefs from 1979 to 1985.

The 6-foot-6, 262-pound Blanton entered the league as an undrafted free agent with the Los Angeles Rams in 2019. He played in 11 regular-season games with the Rams last season, catching four passes for 37 yards. He delivered a breakout performance in last year’s postseason, hauling in seven catches for 57 yards and a score in four playoff contests. He won a Super Bowl ring starting in place of injured tight end Tyler Higbee.

The addition of Blanton will leave the Chiefs with one remaining spot open on the practice squad.