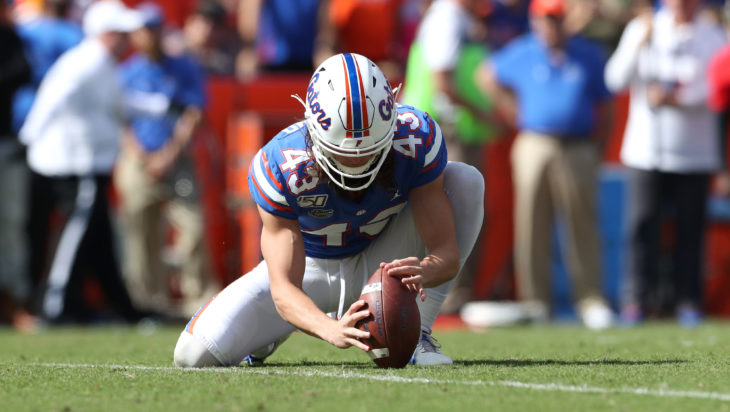 “There’s nobody really out in front right now as we look at it,” Toub said. “I like them both. They both got really, really strong legs, really powerful leg. They consistently hit over 5-0 (second) hang times, which is really impressive.”

Townsend comes to Kansas City from Florida, where he averaged 45.4 yards per punt last season as a semifinalist for the Ray Guy Award as the nation’s best punter. The club signed Townsend as a free agent following the draft, providing $90,000 in guaranteed money as part of a three-year, $2.3 million deal.

“We really liked him coming out,” Toub said. “I had him rated the best punter coming out this year, and he was available for us.”

Newsome entered the league last season as an undrafted rookie free agent from Notre Dame. He signed with the Los Angeles Chargers after the 2019 Draft and averaged 42.1 yards per punt in three preseason games last season before the club released him during the final roster cuts.

Toub gives Townsend the edge in terms of consistent technique. Newsome is more erratic, Toub explained, but the two share one characteristic that makes this position battle up for grabs.

“They both bomb the ball,” Toub said. “We just need to clean Tyler up a little bit more, but I tell you what, it’s going to be fun, the competition is going to be real fun.”

The winner also will need to hold for kicks, a job each punter had experience with during their college careers. Toub said both players have worked on holding for kicks on their own during the offseason while sending him videos for review and feedback. The special teams coach believes both should also benefit from working with veteran long snapper James Winchester and kicker Harrison Butker in improving their holding skills.

“Harrison, I guarantee it, will outwork anybody in the world,” Toub said. “He’s going to have these guys work just as hard. If he ever misses a field goal, it’s not going to be because of a bad hold. Those guys are going to get so many reps.”

The winner faces a difficult challenge in following in the footsteps of Colquitt, whom the club released last month following the NFL Draft. Toub called Colquitt the best punter he’s ever been around as well as a great leader and teammate.