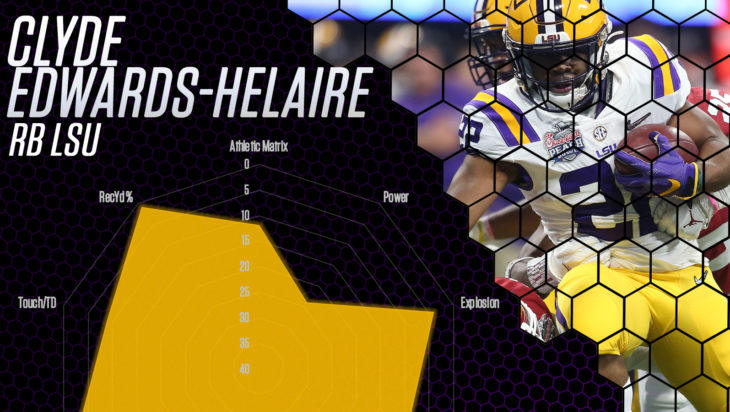 The Kansas City Chiefs selected running back Clyde Edwards-Helaire with the No. 32 in the first round of the NFL draft on Thursday night, and in doing so did something Andy Reid has never been a part of before. That should tell us something.

A running back selected in the first round is a rarity, particularly for Reid. Many analysts, including this one, felt that the value for the 5-foot-7 running back was more aligned with a second-round choice.

In the end, Reid and general manager Brett Veach, got their guy. Here’s what stands out about the decision and Edwards-Helaire’s potential with the Chiefs.

1. A quarterback trade up proved key to the Chiefs selecting Edwards-Helaire. As predicted, Utah State’s Jordan Love was a quarterback commodity teams wanted to trade up to acquire. When the Packers jumped above the Chiefs and in selecting Love at No. 26, the already low-value trade market fell apart. A trade-back to the top half of the second round may have let the Chiefs still select Edwards-Helaire and gain additional draft capital, but that scenario didn’t develop for Veach.

2. The Chiefs organization is unified in the direction they are going. Veach said after the selection that he and Reid see Edwards-Helaire as a premier talent comparing him to former Eagles running back Brian Westbrook. With Patrick Mahomes agreeing with leadership, the addition of another weapon for the offense was a coordinated effort.

3. As a prospect, Edwards-Helaire is the perfect fit for the Kansas City Chiefs. With his low center of gravity and ability to force missed tackles, Edwards Hilaire fits the mold the Chiefs desire. Edwards-Helaire is not an uber-fast prospect but one that uses his body control and short area-quickness to his advantage.

4. The most significant stat that illustrates how the offense will utilize Edwards-Helaire is straight-forward. A total of 22.1 percent of Edwards Hilaire’s scrimmage yards at LSU came on receptions. That is the highest rate in the 2020 draft class.

The AFC West is coming for the Chiefs. With a new quarterback in Los Angeles (Justin Herbert) and new passing game weapons in both Denver (Jerry Jeudy) and Las Vegas (Henry Ruggs), the Chiefs division rivals are gunning to build offenses that can put up more points in an effort to keep pace with the 2020 Chiefs.