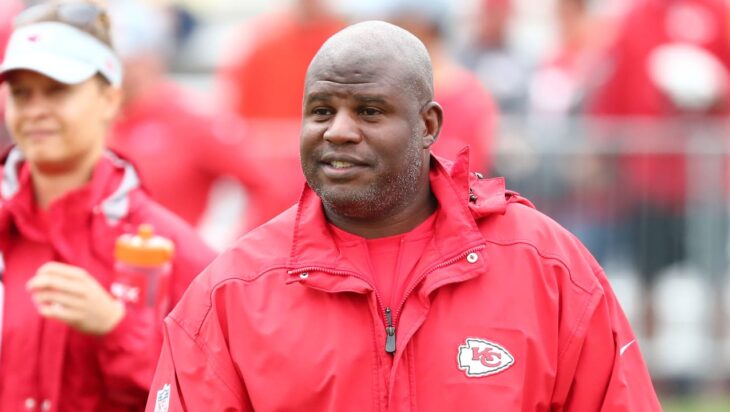 KANSAS CITY, Mo. — Eric Bieniemy’s biggest champion in a bid for an NFL head coaching position has always been Andy Reid, and the Chiefs head coach again on Friday expressed his support for his offensive coordinator.

“It disappoints me that somebody hasn’t hired him,” Reid said. “Obviously because he’s so good, I’m hoping that that takes place this year.

Bieniemy on Thursday dismissed any chatter about his potential candidacy for one of the eight NFL head coaching jobs now vacant.

“It’s always good to be mentioned,” Bieniemy said. “The thing about it, you don’t allow it to become a distraction because, first and foremost, I have a job. Second of all, we’ve got a big game this up and coming weekend and that’s the most important thing, to take care of the business at hand and to focus on the now.”

Reid has no concerns about Bieniemy or other potential coaching or general manager candidates in the organization allowing job interviews to interfere with the task at handy of getting the Chiefs to a third-straight Super Bowl game.

“They’re not going to let it be a distraction,” Reid said. “They’re going to defer to the team and what that’s all about it and then kind of let the chips fall where they may.”

A stumbling block for Bieniemy has been the Chiefs’ deep postseason runs the past two years that have kept the team’s coaching staff committed to Kansas City into February. The NFL this season permitted teams with a head coaching vacancy for 2022 to begin interviews during the final two weeks of the regular season. But that only allowed Jacksonville and Las Vegas to begin their searches early, and the Jaguars passed on Bieniemy last offseason.

Coaches on playoff teams now cannot interview with a prospective team until after their Wild Card game is completed. Reid remains optimistic, however, that the 2022 coaching carousel ends differently for Bieniemy.

“I’m sure between COVID and our long season it hasn’t been real beneficial for EB having the opportunity,” Reid said. “But I think this year he’s going to end up with one.