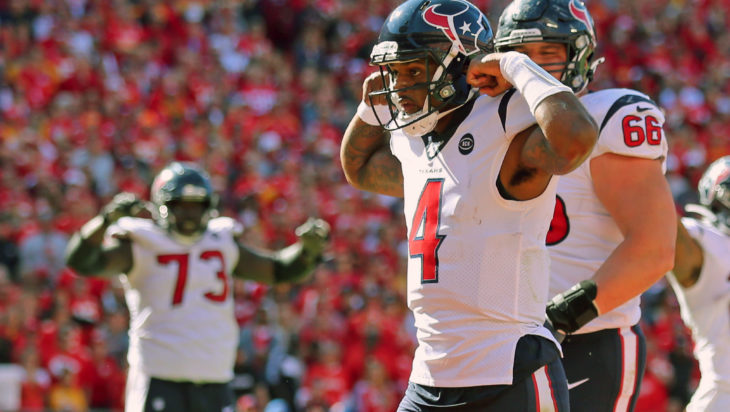 The Texans offense centers around star quarterback, Deshaun Watson. His mobility helps him extend plays and pick up yardage when everything around him breaks down. His accuracy allows him to pick apart a defense as well. Watson’s most important traits, however, are his leadership and ability to find another gear with the game on the line. If the Texans find a way to get the ball in his hands late with a chance to win, bet that Watson will step up trying to carry his team over the finish line.

The Houston running backs present very different skill sets, but both perform effectively within this offense. Carlos Hyde handles the bulk of the running between the tackles. He’s a bigger back that runs with vision and power. Duke Johnson picked up more work recently, mostly on outside runs and plenty of looks in the passing game. Johnson is the faster and more shifty of the two running backs and can do damage in the open field.

DeAndre Hopkins, Will Fuller V, and Kenny Stills form a very talented trio of receivers. Hopkins serves a possession receiver who catches anything thrown in his zip code. He finds a way to come down with a majority of 50-50 contested balls and maintains excellent balance through contact. Fuller and Stills stretch the field with their speed, although both are dealing with lower-body injuries that could limit their effectiveness. Tight ends Jordan Akins and Darren Fells are mainly used in the short passing game.

With a talented cast on offense and a game-changing player at quarterback, the Texans offense is very tough to stop completely. The Chiefs need to limit the big plays, force Houston off the field and take advantage of any mistakes.

The Texans offensive line doesn’t create a ton of movement in the run game. They can get a body on a defender, but they lack the power to clear lanes for their running backs. The Chiefs defensive line must eat up blocks, allowing the linebackers room to roam and make plays.

Houston will double team defenders at the point of attack, then slide one of the linemen off the double team to get to the next level to pick up a block. When this happens, the defensive lineman can shed his blocker and make the tackle. Houston recently incorporated pulling linemen and tight ends into the run game.

When tight end Fells serves as the puller, the defensive end should attack the below-average blocker. This will cause the running back to hesitate and look for a new hole to run through, allowing the defense to rally and surround him. The linebackers will be met with a puller in the hole as well and have to stand up the blocker, effectively plugging the gap, shedding the block and making the tackle.

The Texans have a passing counter off of their split zone looks, where they release the pulling tight end into the flats and run boots and waggles to get Watson on the edge with a run-pass option. This is where Watson does his best work. The key to slowing this attack down is to chip the tight end as he pulls, delaying his release into the flats. With the tight end delayed, Watson will look to a deeper crossing route or turn into a runner. The Chiefs can funnel him to the sideline and force him out of bounds. Watson shows a tendency to pass when running to the right and taking it himself when running to the left.

The Houston offensive line is a solid group, but the show some flaws in pass blocking. The Chiefs can attack the right side of the line with twists. Right guard Zach Fulton and center Nick Martin can be driven back by the much more talented Chiefs defensive line. They can eventually anchor, but the collapse of the pocket will affect Watson.

Right tackle Chris Clark struggles against good speed and power rushers with consistency, so edge rushers Frank Clark and Terrell Suggs present a challenging matchup for him. Left tackle Laremy Tunsil is one of the better offensive linemen for Houston, but he has issues with penalties. Tunsil will also occasionally give up the corner to a speed rusher. The Chiefs need to be aware when rushing with speed to his side though because he can force the rusher to get deeper than the quarterback. That allows Watson to step up and escape through the giant hole between the left tackle and guard. A well-timed speed rush, with a delayed blitz through the B-gap can lure Watson into a trap.

Kansas City needs to put a ceiling on the Texans’ passing attack. They can’t let Fuller and Stills beat them over the top. Stopping Hopkins will be a great test for the secondary. Charvarius Ward matches up best because he can use his length and physical play to slow down Hopkins. The Chiefs can also look to use a safety as a robber to try to take away the dig routes that Hopkins excels at. Ultimately, Kansas City needs to get physical with Hopkins and frustrate him all game long, mixing in different looks so he is constantly searching for answers.