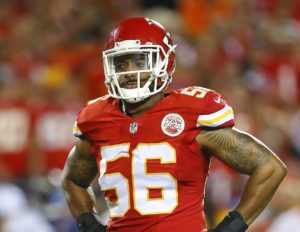 Wayne Johnson earned a Navy Commendation Medal for acts of heroism during the Vietnam War while a gunner stationed aboard the battleship New Jersey.

The Pro Bowl linebacker regularly visit troops at Ft. Leavenworth, including an NFL Play 60 clinic for youth living on the base. Johnson also helped support the team’s annual Red Friday efforts to benefit Ft. Riley’s Wounded Warriors Transition Battalion, whose mission is to establish conditions for healing and promote timely return to the force or transition into a productive veteran within the community.

Finalists for the award, present by USAA, along with the winner will be honored at the NFL Honors awards show in Houston on Saturday, Feb. 4, the night before Super Bowl LI.