KANSAS CITY, Mo. — The Chiefs lost to the Tennessee Titans 19-17 at Arrowhead Stadium Sunday, and on a day of near misses any number of a dozen or more plays could have changed the final result.

But no play has been dissected and discussed as much as De’Anthony Thomas’ 4-yard run to the goal line with about 4 minutes, 30 seconds left in the first half.

Thomas and the Chiefs thought he scored touchdown. Thomas and quarterback Alex Smith celebrated as such. But officials ruled Thomas out of bounds short of the goal line, setting up two failed runs from inside the 1-yard line. The Chiefs turned the ball over on downs.

Much of the confusion on the play starts with a poor communication from referee John Hussey.

“The ruling on the field is the runner was short of the goal line, the ball was outside the pylon,” Hussey said.

The phrase “outside the pylon” opened the door to a series of questions about application of NFL rules.

Here’s a screenshot at the moment Thomas hit the pylon, which means he is out of bounds and the play is dead. 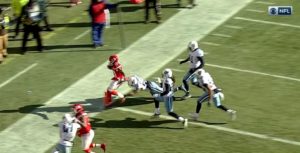 Thomas is carrying the ball in his right arm and his right leg hits the pylon. The angle suggests that at the moment Thomas hit the pylon, the ball appears over the out of bounds area of the field as well as outside the goal line.

Hussey introduced confusion by emphasizing Thomas as “outside the pylon.” That phrase typically refers to the ball in relationship to being in bounds or out of bounds, not whether the ball crossed the goal line.

Some interpretations on social media cite Approved Ruling 11.2 in the NFL rule book:

Second-and-10 on B18. Runner A1 takes handoff and runs down the sideline toward the goal line with the ball in his
outside arm. He crosses the goal line plane standing and gets his left foot down in the end zone with the ball to the
outside of the pylon.
Ruling: Touchdown. Part of the ball crossing over or inside the pylon only applies to an airborne runner who lands out of
bounds.

The argument that Thomas scored a touchdown places an emphasis on Thomas getting his foot down in the end zone (or at least inside the pylon) and that it does not matter where the ball is.

Except it does indeed matter. AR 11.2 applies to a ball carrier entering the end zone and the ball being outside the pylon over the out of bounds area.

But before the ball carrier goes out of bounds, the ball must break the plane of the end zone. Hussey appears to have made a confusing error by declaring Thomas outside the pylon. He appeared to mean Thomas was outside the goal line when he went out of bounds.

The Approve Ruling tries to differentiate between a runner on the ground and an airborne runner. Had Thomas left his feet, the ball had to pass inside or over the pylon.

For example, here’s a touchdown run by Michael Vick illustrating how a diving player must get the ball inside the pylon to score.

If the officials determined that Thomas broke the plane of the end zone but did not score because the ball was outside the end zone, that would appear to be an incorrect ruling.

Andy Reid appeared ready to challenge the play. He held the red challenge flag in his hand and shook it several times while talking to the officials. He eventually chose not to challenge.

“We have to get the ball across, it was pretty clear, the official was standing right there,” Reid said. “It’s not his foot, it’s the football going across that, in front of that pylon. It has to get across that pylon.”

Should the Chiefs have challenged? It posed a low-risk decision. A failed challenge would lose a the team a challenge and a first half timeout. That’s not a terribly high cost.

But it’s highly unlikely the Chiefs would have won the challenge. The replay official would need visual evidence that Thomas broke the plane of the end zone before he stepped out of bounds.

Chiefs officials contend, and arguably rightly so, that officials on the field normally would rule the play a touchdown and then allow for an official review that does not cost a team a timeout and a challenge.

Based on the visual evidence available, it’s likely that whatever the officials ruled on the field would stand due to the absence of clear and convincing evidence to the contrary.

Matt Derrick is the lead beat writer for ChiefsDigest.com and the Topeka Capital-Journal. Use the contact page to reach him or find him on Twitter: @MattDerrick.