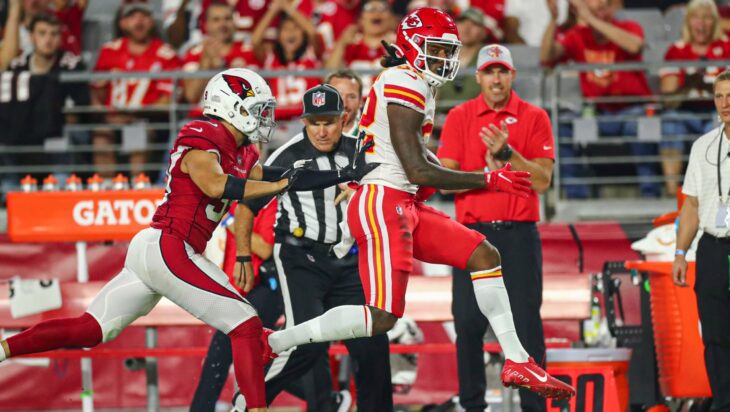 KANSAS CITY, Mo. – Chad Henne’s throw spiraled through the hot, humid air during Monday’s practice, with the heat index at 107 degrees. The ball arrived just a tad behind Daurice Fountain but that didn’t deter the Chiefs wide receiver. He reached out with his left arm and snagged the ball with one hand, pulling in the catch and racing for the end zone once again.

It’s simply the latest in a series of plays that offensive coordinator Eric Bieniemy has watched Fountain make since his arrival in Kansas City in May.

“He’s one of those kids that does not want to take anything for granted,” Bieniemy said. “The only thing Daurice wants to know is what can he do better.”

Fountain joined the club as a tryout player at May’s rookie minicamp, and since then he’s played with the poise of a seasoned veteran.

“I just wanted them to give me a chance,” Fountain said after a recent training camp practice in St. Joseph. “That’s what they have, they’ve done that and I’ve been trying to take advantage of my opportunities. So far it’s been going pretty well. I’m just thankful that they took me in, gave me a chance, gave me the opportunity to compete.”

Fountain considered himself a late bloomer coming out of James Madison Memorial High School in Madison, Wisconsin. He set a state record en route to winning the 110-meter hurdles and also added a state championship in the long jump. After getting overlooked by his hometown Badgers in the Big Ten and by other football powers, Fountain took his talents to Northern Iowa at the Football Championship Subdivision. He saw playing time in 14 games as a true freshman and finished his career with 150 catches for 2,077 yards and 23 touchdowns.

He capped off his collegiate playing days with an appearance in the East-West Shrine game, earning offensive most valuable player honors with three catches for 61 yards and returning two punts for 40 yards. The Indianapolis Colts selected Fountain in the fifth round of the 2018 NFL Draft, No. 159 overall.

Fountain spent most of his rookie season on the practice squad and earned a promotion to the active roster in December while appearing in one game. He seemed poised for a breakout season in year two, following up a stellar training camp in leading the Colts with five catches for 63 yards in their preseason opener against Buffalo.

Then disaster struck. On the final day of training camp before the second preseason game of 2019, Fountain was delivering a block on a run play during a joint practice with the Cleveland Browns. His left ankle collapsed underneath him, causing a fracture and dislocation that would require three surgeries to correct.

After spending the 2019 season on injured reserve, Fountain returned to the Colts last season, bouncing back and forth between the active roster and the practice squad. He caught two passes for 23 yards in Week 3 against the New York Jets but it took more than a year before he finally started putting the injury in his past.

“I got to say probably towards the end of the season that’s when I really started feeling like myself,” Fountain said. “Nowadays I can’t even tell it was the ankle that was broke.”

Despite feeling healthy for the first time since the injury, Fountain found himself in January without a job. The Colts didn’t offer him a new contract and free agency kicked off with no offers from other clubs. The 25-year-old faced a scary and uncertain future.

“I was really nervous that a team wouldn’t take a shot at me,” Fountain said. “My mind was just racing but at the end of the I just put my faith in God and I kept work. I kept working and had faith that an opportunity was going to come, so when the Chiefs called I was really grateful.”

The Chiefs call came after the NFL draft as the club prepared for its rookie minicamp. In a normal season 60 or more draft picks, rookie free agents and tryout players will descend on the camp. This year’s COVID-19 protocols capped the class at 29 players with just five on a tryout basis. Fountain received one of those golden tickets and hit the ground running, according to wide receivers coach Joe Bleymaier.

“He came in super focused and intent on making the team, and you can tell in his mind he wasn’t going to be denied,” Bleymaier said. “We’ve talked about early in order to do that he had to be consistent and show the same effort and the same intensity every single day and ever play, and he hasn’t shied away from that.”

Fountain leads the Chiefs in the preseason with seven catches for 92 yards, backing up the observations general manager Brett Veach made before the club’s first preseason game.

“He’s been a guy that I think people need to pay attention to,” Veach said. “We talk about him, and no one talks about him, and we’re in our meetings being like, ‘This guy is making plays every single day.’ I’m watching this guy, and no one’s talking about this guy.”

Now many people are talking about Fountain. In a deep wide receiver group filled with veterans such as Tyreek Hill, Mecole Hardman, Demarcus Robinson, Byron Pringle and Marcus Kemp, Fountain has made it a difficult decision for the Chiefs to keep as many as six wide receivers on the opening 53-player roster.

“He hasn’t been here that long while some of the other guys have been here but he hasn’t, Veach said. “He’s going to make a case for himself. Again, if he can put that on tape and mimic what he’s doing so far in camp, he’s going to put himself in a good position.”

Despite the competition at the wide receiver position, Fountain says there has been nothing but teamwork and cooperation among the players in the roster battle.

“It’s crazy with a stacked group like this,” Fountain said. “I’ve heard from other places, you have a lot of people that have egos, that they kind of like stick to themselves. Everybody here is so selfless. They just talk to you, they’re trying to help you whether it’s from Kemp, Tyreek, D-Rob, whomever it may be, (Gehrig) Dieter, they’ve all been willing to help me a lot. I’m really appreciative to them.”

Fountain’s roster bid is also bolstered by traits he possesses that the Chiefs lack with the departure of Sammy Watkins. At 6-foot-2, 210 pounds, he fits the profile of an X-receiver who can work off the ball and do the dirty work necessary to free up the team’s other speedsters.

“I was a big Sammy Watkins fan when I was coming out of college,” Fountain said. “I got a chance to relax in the dorm room and watch some of his film. I see what they’re talking about when they’re trying to give comparisons because he played really physical. He was out there, he was literally like a wrecking force. I try to model my game after that and try to imitate that look to help myself get better and contribute to the team.”

When it comes to playing physical, Fountain doesn’t shy away from the challenge.

“I love it to be honest,” Fountain said. “I want a job, I want to help the team as best as I can. If they need me to go be that guy to do the dirty work, so be it. I’ll put on my blue-collar shirt and I’m going to go out there and work.”

One unanswered question about Fountain lies on special teams. He’s played just five special teams snaps through two games but he picked up a tackle on kick coverage against Arizona and returned a kick for 21 yards against San Francisco. Special teams coordinator Dave Toub wants to see more.

“That will help him but he’s done such a good job on offense, I’m not saying it’s a shoo (in) – he’s one of those guys that’s battling, he’s a bubble guy. Those guys, they are fighting for a spot. There’s a lot of competition on this team. When you see us cutting great players like we are – have – it just tells you that we have a lot of competition.”

Bieniemy sees in Fountain a player with the work ethic to win that competition.

“The kid works hard,” Bieniemy said. “On top of that he’s a smart player, and then obviously you’ve seen the fruits of his labor because what he’s done in practice is showing up on game day. We see it each and every day, and it’s because he’s invested in himself but also invest in that playbook. Then when he has the opportunity to make that play, he just goes up and makes it.”

Despite his success in training camp and through the first two preseason games, Fountain says he isn’t satisfied yet.

“I want to come out here and compete so I’m going to keep on picking the guys’ brains, picking my coaches’ brains and ask them what can I do, hopefully so I can become the player that I want to be.”