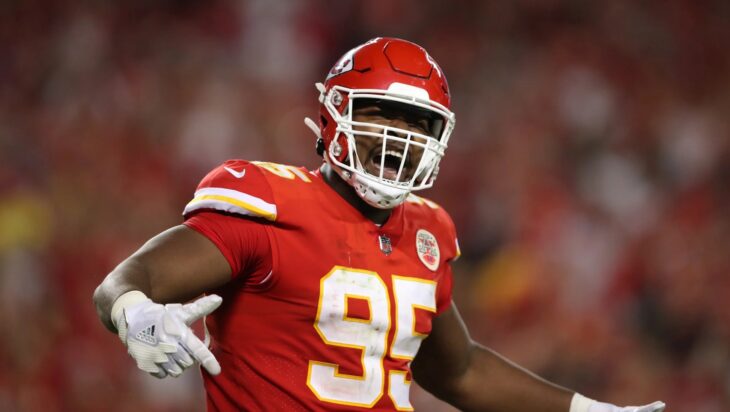 KANSAS CITY, Mo. – Chris Jones made what at first glance seemed a game-changing play for the Chiefs with just more than a minute to go in the first half against the Las Vegas Raiders Monday night – and it was, just not for the reasons as it first appeared.

Lining up opposite Raiders right tackle Jermaine Eluemunor on third-and-8, Jones sped around the edge in forcing quarterback Derek Carr to step up in the pocket. Jones extended his arms around Carr and forced the football loose, landing on the ground with both Carr and the football in his grasp.

Head coach Andy Reid and the Chiefs started celebrating a turnover until they saw the flag thrown by referee Carl Cheffers.

“I thought he had the ball, that’s what I thought,” Reid said. “But that’s (the referees’) job. They do that.”

Cheffers flagged Jones for a personal foul for roughing the passer, ruling from his point of view that Jones landed with his full weight on Carr without making an effort to brace his fall.

“The quarterback is protected from being tackled with full body weight,” Cheffers told pool reporter Adam Teicher. “My ruling was roughing the passer for that reason.”

Cheffers said that Carr losing control of the football did not alter the protection he’s afforded as a passer under the rule.

“No, because he still gets passing protection until he can defend himself,” Cheffers said. “So, with him being in a passing posture and actually attempting to make a pass, he’s going to get full protection until the time when he actually can protect himself. The fact that the ball came out and was subsequently recovered by the defense is not relevant as far as the protection the quarterback gets.”

Jones did not agree with the decision.

An animated Reid argued with Cheffers and other officials to no avail. Reid extended the discussion until halftime, having another conversation with Cheffers before heading to the locker room. Reid saw the call lighting a spark with his team.

“It gave us a little juice, probably,” Reid said.

Reid wasn’t the only one steaming, either.

“It definitely got the sideline hot,” said Nick Allegretti, starting at right guard in place of injured Trey Smith. “We were kind of already getting into rhythm at the point, so I think it was good timing for us to go take advantage and start playing our way.”

The penalty awarded the Raiders a first down at the Kansas City 40-yard line, a situation they converted into a 50-yard field goal from Daniel Carlson for a 20-7 lead.

Avoiding the turnover and gaining three points should have given a momentum boost to the Raiders but the play instead seemed to shake the Chiefs out of their first-half doldrums. With just 17 seconds on the clock, Patrick Mahomes and the Kansas City offense moved 34 yards in three plays, aided by a 15-yard face mask penalty on Raiders safety Roderic Teamer. That setup kicker Matthew Wright for a 59-yard field that pulled the Chiefs within 20-10 at the break.

Mahomes said the emotions boiling on the Kansas City sideline weren’t exclusive to frustration over the Jones’ penalty.

“I think there was anger of just how we had played up until that point,” Mahomes said. “I felt like they were the physical team, they brought the fight to us, but I thought our guys responded. I was just talking with guys in the locker room, sometimes these games are the ones that build the true character of the team.

“Whenever you come out and they throw that first punch and hit you, and how you respond and go back and fight, that was good to see from this team.”

Trailing 17-7 at the time of the Jones’ penalty, the Chiefs scored 17-straight points taking a 24-20 lead, and never looked back despite some close fourth-quarter calls.

Jones at least found a way to laugh and flash a smile when asked how he could avoid a penalty in the future on a similar play.

“Hey, listen, this is a Christian-like league, man, I’m going to pray that I stay off the quarterback, OK,” Jones said. “If I have to, pick him up and carry him, lay him nowadays.”