KANSAS CITY, Mo. — Just more than 10 years ago, newly minted Chiefs general manager Brett Veach patrolled the campus of the University of Delaware, serving as the event manager for the athletic department and biding his time for the opportunity to make his mark. 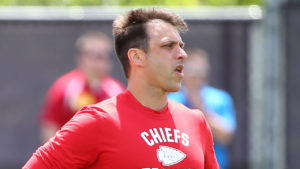 The chance arrived when Veach landed the opportunity of a lifetime — working as an assistant for Philadelphia Eagles coach Andy Reid.

That open door paved the way for a meteoric rise for Veach. The 39-year-old quickly made his mark, catching Reid’s eye with his work ethic and football savvy. The veteran coach charted a course for Veach up the ranks through the team’s  scouting department. The experiences and relationships Veach gained over the last decade prepared him for his latest role as Chiefs general manager.

Delaware can lay claim to being the second-most fertile cradle for delivering coaches and executives to Kansas City. Veach and offensive coordinator Matt Nagy played three seasons together for the Fightin’ Blue Hens. The duo helped lead to a 12-2 season in 2000 and a berth in the NCAA Division I-AA national semifinals.

Veach thrived in coach Tubby Raymond’s Wing-T offense, catching 99 passes for 1,470 yards along with 12 touchdowns during the 1998-2001 seasons. He averaged 22.2 yards on kick returns, and ranks No. 12 on the school’s all-purpose yardage list with 3,382 yards. He earned third-team All-Atlantic 10 honors in 2000 and also earned Academic All-American honors.

Veach first caught the attention of Andy Reid when he served as an intern for the Eagles in 2004. Veach volunteered as an assistant football coach for Delaware in 2002-03.

In 2005 he joined the university as their primary manager for home athletic events. He managed the department’s award system, coordinated drug-testing programs. and managed postseason championships held on campus. He also provider operational assistant for men’s and women’s basketball along with field hockey, volleyball and women’s lacrosse.

But it wasn’t football.

That all changed when Reid brought Veach back to the Eagles as his assistant in 2007. He immediately displayed a keen eye for talent. Reid assigned Veach to study receivers for the 2008 draft — the year the team selected DeSean Jackson in the second round.

Veach joined Philadelphia’s scouting department in 2010 and earned promotion as the team’s southeast college scout in 2011. Under his eye the Eagles drafted defensive tackle Fletcher Cox from Mississippi State in the first round of the 2012 draft. The team also selected fourth-round linebacker Brandon Boykin.

Veach left the Eagles for Kansas City in March 2013, but his fingerprints remained on the team’s draft that season. The Eagles spent their third-round pick on LSU defensive tackle Bennie Logan. Logan signed with the Chiefs as a free agent this offseason and stands in line to start on the team’s defensive line.

Count Buffalo Bills and former Eagles running back LeSean McCoy among Veach’s many fans. McCoy publicly campaigned for Kansas City’s co-director of player personnel to win the Bills general manager job following the ouster of Doug Waley in May.

Veach served as Reid’s assistant during the 2009 draft, the Eagles drafted McCoy in the second round with the 53rd overall pick.

McCoy’s campaign for Veach boosted his recognition and raised his image as a future GM-candidate — a future realized just two months later in Kansas City.