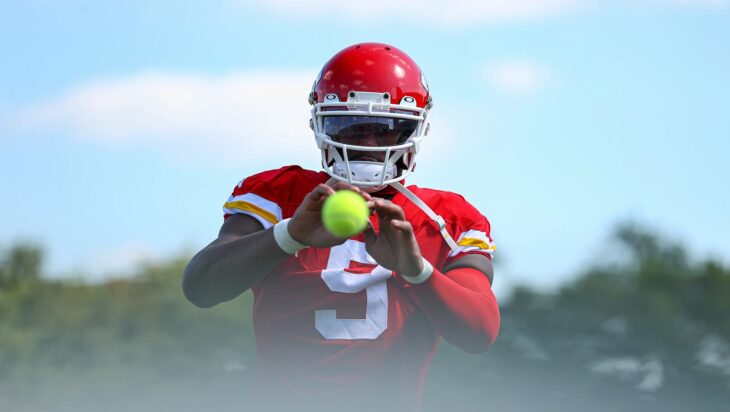 KANSAS CITY, Mo. — The first injury report of the 2022 season took one sentence for Chiefs head coach Andy Reid to summarize on Wednesday.

“Everybody will practice today, so we’re good there,” Reid said.

Indeed it was a full house on the practice field Wednesday afternoon with all 52 players on the active roster full participants. The Chiefs have one open roster spot available after placing tight end Blake Bell on the injured reserve. Bell’s hip surgery expects to keep him out for at least the first four weeks of the season, if not more.

Smith-Schuster’s sore knee kept him out of the team’s final two preseason games but he should be fully healthy heading into Sunday’s contest, and he’s excited to get back on the field with his new club.

“Knee’s great,” he said. “Just a couple minor issues. Playing this game for six years, I’m not the young JuJu you know anymore. I’m getting older, I’m more of an adult, and it takes time. It’s fully healed, and I just can’t wait to play.”

None of the injuries expect to keep these players out of Sunday’s game season opener against Arizona. The Cardinals, on the other hand, face a series of questions with big names on their injury report.

Defensive end J.J. Watt did not not practice Wednesday. Watt’s been dealing with a calf injury while also returning from a positive COVID-19 test on Aug. 21, but head coach Kliff Kingsbury said he’s hopeful Watt can play this weekend.

It’s bigger question mark for tight end Zach Ertz, who was a limited participant on Wednesday. He’s been sideline since Aug. 4 with a calf injury, and this week marks his first action in more than a month. With wide receiver Deandre Hopkins suspended for the first six games of the season due to a violation of the league’s performancing-enhance substance policy, the availability of Ertz is critical for Kingsbury’s offense.