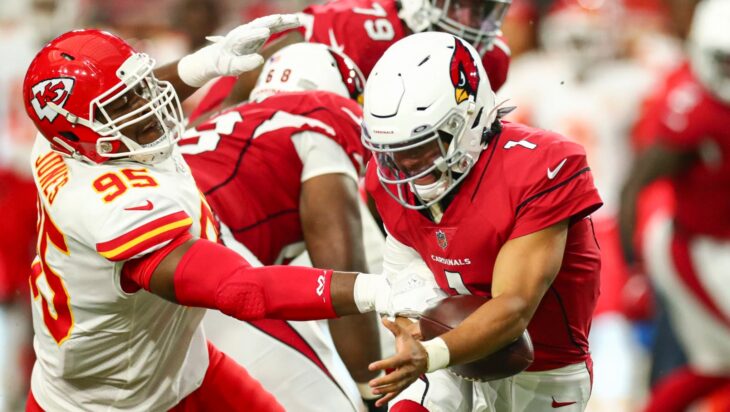 KANSAS CITY, Mo. — The Chiefs returned home on Monday following their training camp at Missouri Western State University and their second preseason game at Arizona on Friday, but they did so without defensive end Chris Jones in attendance.

Jones sat out Monday morning’s walkthrough and afternoon practice due to an illness, which head coach Andy Reid says was not COVID-19 related. Linebacker Dorian O’Daniel was also out with an illness.

Jones’ absence left the Chiefs working without their two starting defensive ends on Monday with Frank Clark remaining sidelined with a hamstring issue.

Wide receiver Tyreek Hill, who was a last-minute scratch Friday night against the Cardinals, took part in Monday’s walkthrough and was scheduled to practice Monday afternoon, Reid said. Cornerback Rashad Fenton also did not play against Arizona due to a hamstring issue and remained out Monday.

Right guard Laurent Duvernay-Tardif remains out with a fractured hand. Offensive lineman Kyle Long (leg) is still on the physically unable to perform list and defensive end Malik Herring is on the non-football injury list