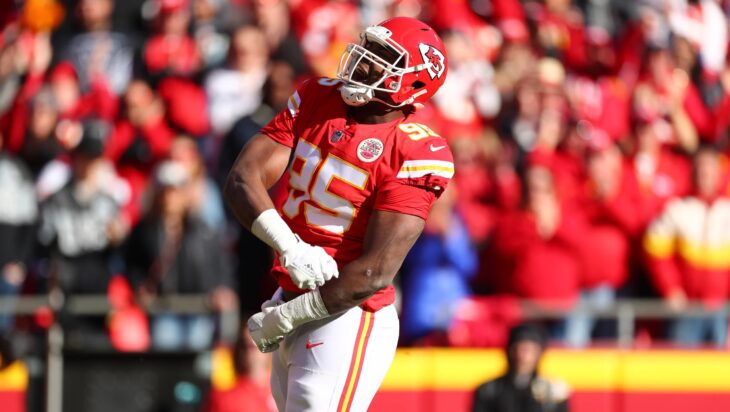 The Chiefs will be without defensive lineman Chris Jones and wide receiver Josh Gordon when they visit the Los Angeles Chargers Thursday night after the pair were placed on the COVID-19 reserve list earlier this week.

The club also added cornerback Charvarius Ward to the team’s injury report with an illness, listing him as questionable for the game less than four hours before kickoff. The Chiefs already ruled out L’Jarius Sneed for personal reasons, which could leave the team without their top two starting cornerbacks.

Jones and Gordon won’t be in Los Angeles, and neither will linebacker Willie Gay Jr., who was placed on COVID-19 reserve Wednesday and was already ruled out for the contest.

Broughton was activated using a standard elevation, while the others were tagged as COVID-19 replacements. There is no limit on COVID-19 elevations for practice squad players but the standard elevation can only be used on a player twice during the regular season.

Thursday afternoon’s elevations put the Chiefs at 53 players on the active roster for the game. The club must list five players as inactive before 5:50 p.m. central time. Jones, Gay and Gordon remain on COVID-19 reserve and are not on the active roster and will not be included on the inactive list.

Bootle (No. 2) is a rookie free agent who joined the Chiefs in May. He played seven special teams snaps for the Chiefs in the team’s Week 4 win over Philadelphia and made his first NFL tackle. He was elevated from the practice squad last week in case Rashad Fenton could not play but was inactive against the Broncos.

Broughton (No. 79) entered the league as a seventh-round selection of the Chargers in 2019 and played in 11 games with Los Angeles the past two seasons. He’s picked up nine total tackles and broke up a pass while playing 115 defensive snaps and 27 on special teams. He signed with the Chiefs practice squad on Sept. 3 and the Chargers placed him waivers during final preseason roster cuts.

Fountain (No. 82) signed with the Chiefs in May and won a spot on the opening week roster after a strong training camp. He played 20 total snaps against Dallas in Week 11 for the Chiefs and has two catches for 23 during the past three seasons with Indianapolis.

Harris (No. 47) has spent the past three seasons with the Chiefs and played in six contest earlier this year before he was placed on waivers Oct. 9 and re-signed with the the club’s practice squad. Harris has played 52 special teams snaps this season but started two games on defense last season during which he collected 14 total tackles and recovered a fumble.