9:41 p.m.: Andy Reid and Patrick Mahomes both talked to the local Kansas City media. Reid preached patience with Mahomes, saying the team is in perfect position to teach him the offense.

“He’s coming into a great room,” Reid said. “He gets an opportunity to learn from Alex Smith, which will be a phenomenal experience for him.

8:42 p.m.: Fans at the Chiefs draft day watch party celebrated the team’s move to acquire Patrick Mahomes. One observer likened it to watching a Super Bowl celebration. The team shot off fireworks outside following the selection.

The media is awaiting Andy Reid’s arrival at the podium to discuss the selection.

8:20 p.m.: The Chiefs make a blockbuster trade, moving up to No. 10 to land Texas Tech quarterback Patrick Mahomes. The team sends the No. 27 pick in the first round this year along with the No. 91 pick in the third round plus their first round pick in 2018 to Buffalo for the opportunity to select Mahomes.

7:59 p.m.: Los Angeles Chargers were bound to get a good player at No. 7, but Mike Williams should be an excellent fit for the Chargers. Williams provides Philip Rivers with an elite target in the passing game. The combination of Williams and last year’s first-round pick Joey Bosa could haunt AFC West divisional rivals for the next few years.

7:45 p.m.: Story of the first hour of the draft so far is definitely the fleecing the 49ers pulled off on the Bears. A third and fourth round pick this year and third round pick next year to move up one spot cost the Bears dearly. And the 49ers may have gotten the player they wanted anyway.

7:23 p.m.: The Bears trading up to No. 2 to select North Carolina’s Mitch Trubisky may start the run on quarterbacks, and could be a bad sign for Chiefs fans hoping the team lands one of the top tier QBs in the draft.

7:15 p.m.: The first pick is in, and the Cleveland Browns have selected Texas A&M defensive end Myles Garrett. That selection should have little ripple effect on the Chiefs. If the Browns still want to select at quarterback in front of Kansas City, they still hold the No. 12 overall pick.

6:50 p.m.: Smoke but not fire so far regarding NFL Network’s Ian Rapoport indicating Chiefs inquiring about making a move to top 10.

The team making the most noise right now about moving up, maybe even into the Top 10 — The #KCChiefs. Due diligence or…?

If the Chiefs want to make a leap that big, it will be costly. It’s difficult to imagine the Chiefs moving from 27 into the top 10 without including both this year’s and next year’s No. 1 pick. Perhaps the Chiefs are just doing their due diligence or just the usual NFL draft smoke screen.

6:19 p.m.: Chiefs chairman/CEO Clark Hunt expressed confidence that his team is positioned well to be active in this year’s draft. Hunt said he’s fine staying put with the 27th pick in the first round, but sees benefits to using their 10 draft picks to move up in the draft. He also mentioned trading out of the first round to stockpile more picks for next year’s draft.

3:37 p.m.: Ole Miss quarterback Chad Kelly said in a radio interview today mentioned the Chiefs and Seahawks as teams he connected with well leading up to the draft.

Chad Kelly mention #Seahawks and #Chiefs among teams he felt he had a good vibe with. Met with Andy Reid for a while.

Kelly also added he and his agent have been told he’s projected to be selected anywhere from the second to the fifth round. Kelly is one of the many quarterbacks the Chiefs reportedly brought in for a private workout. 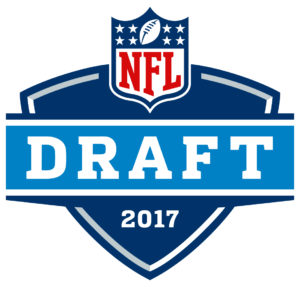 3:30 p.m.: T-minus three and a half hours until the start of the first round of the 2017 NFL draft. The draft begins at 7 p.m. The Chiefs hold the 27th pick. Last year the 27th pick took placed about 10:15 Kansas City time.
If the Chiefs want to move up, a good comparison to draw comes from the 2014 draft. The Saints traded the 27th pick and a third-round selection (No. 91, which the Chiefs own this year) to Arizona for the No. 20 pick.

That could come into play if a quarterback the Chiefs want remains available. The Broncos hold the 20th pick this year, so the Chiefs might need to talk to Tampa Bay at No. 19, Detroit at No. 21 or Miami at No. 22. The next quarterback likely comes off the board at No. 25 to the Houston Texans.