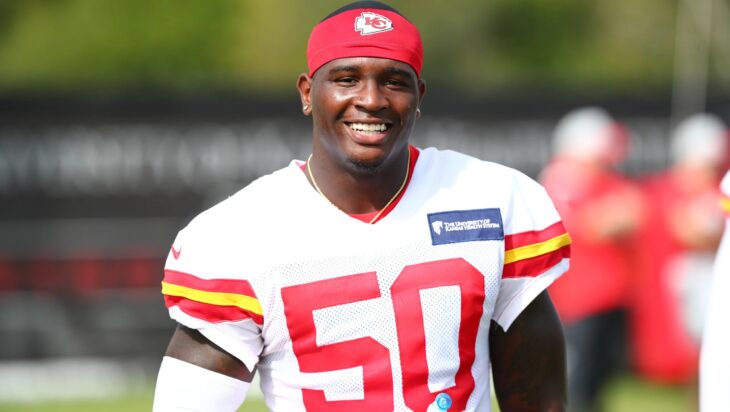 KANSAS CITY, Mo. – Willie Gay may see his first action of the season on Sunday night against the Buffalo Bills after the Chiefs activated the second-year linebacker from injured reserve ahead of Saturday afternoon’s roster deadline.

The club made room for Gay on the 53-player roster by waiving linebacker Darius Harris. The team also promoted defensive end Demone Harris from the practice squad for Sunday’s game.

Gay was added to the team’s injury report as questionable due to the toe injury. He joins defensive end Chris Jones (wrist) and cornerback Charvarius Ward (quad) who are also listed as questionable. Jones is considered a game-day decision, and Harris adds depth at the edge rusher position if Jones is unable to play.

Gay started the season on injured reserve after suffering a toe injury during the team’s preseason finale against the Minnesota Vikings on Aug. 27. The club designated Gay to return from injured reserve on Tuesday, starting a 21-day clock during which players can resume practice without being added to the active roster.

His return to the active roster this weekend seemed in doubt on Friday after head coach Andy Reid said Gay was excused from practice for personal reasons. He didn’t rule out Gay playing against the Bills, however.

“We’ll have to just see how it goes here in the next couple days with that,” Reid said. “As long as he can get in and know his stuff and feels comfortable with his foot, we’d be OK there.”

Gay played in all 16 regular-season games for the Chiefs as a rookie, including eight starts. He totaled 39 combined tackles and a sack while playing 267 defensive snaps. Gay was also a key special teams player, with his 241 snaps ranking fifth on the team.

But Gay is expected to assume a larger role on defense this season, lining up as a starter at outside linebacker beginning during offseason workouts. The departure of Harris leaves the Chiefs with Anthony Hitchens, Nick Bolton, Ben Niemann and Dorian O’Daniel in the team’s linebacker room.

Bolton says he learned much from playing with Gay during training camp.

“I’m glad to see what he brings back to us,” Bolton said. “Fast, powerful, violent, everything you need for the linebacker position, he can do it. I’m just excited for him to be back.

Harris played in each of the first four games, playing 33 special teams snaps but no snaps on defense. He’s a strong candidate to return to the club’s practice squad if he clears waivers.