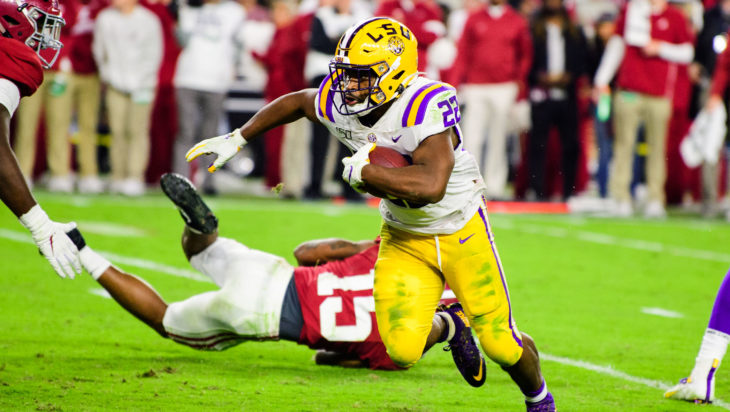 KANSAS CITY, Mo. — As the scouting process for the NFL Draft reaches its pick, Chiefs general manager Brett Veach gives head coach Andy Reid a group of players to evaluate. When Veach handed off the tape of LSU running back Clyde Edwards-Helaire, he invoked the name of a favorite player from Reid’s past in Philadelphia.

“I told coach, I said, ‘Wait until you finish up your work on Clyde Edwards-Helaire, he’s going to remind you of Brian Westbrook.’ Coach called me back, he said, “He’s better than Brian.”

Edwards-Helaire comes to Kansas City fresh off helping LSU to a national championship in his junior season. The 5-foot-7, 207-pound back comes in a bit undersized by NFL standards at the position, but Veach says his low center of gravity and ability to make defenders miss in the open field fits perfectly with the Chiefs east-west offensive style and vertical passing game.

“I think just the way that our offense is constructed, I think this guy will thrive and I think he will be able to handle the workload,” Veach said.

Edwards-Helaire worked slowly into the lineup at LSU, playing sparingly as a freshman in 2017. He quickly developed into a leadership role, however, earning team MVP honors and a captain role on a team featured Heisman Trophy winner Joe Burrow. He rushed for 1,414 yards and 16 touchdowns in LSU’s national title season while adding 55 catches for 453 yards as a receiver out of the backfield.

He sees many similarities between the Kansas City offense and the offense he ran at LSU, particularly with how running backs are used in the passing game.

“Any check down, any way the back can get out and run a route, that’s where I absolutely did most of my damage as far as being in the passing game,” Edwards-Helaire said, “and that’s what Kansas City is big on and that’s what the foundation is built on, being able to get the ball in space and spread the ball out. That makes defenses stress. Being able to be a running back and catch the ball out of the backfield and run routes, I feel like everything is a perfect mesh.”

The Chiefs met with Edwards-Helaire at the NFL Combine, and he said at the time playing with the Chiefs and Patrick Mahomes would be “a dream come true.”

“Playing with Patrick Mahomes would also be something pretty cool,” he said at the time. “That offense, it kinda, it’s pretty much the same way we ran our college offense. Get guys in space and let them make plays. And that’s where I made my money.”

The comparison to Westbrook should tantalize Chiefs fans. Westbrook was a bit taller at 5-foot-10, but his elusiveness made him a dual-threat out of the backfield for Reid’s Eagles teams for eight seasons. Westbrook posted five-straight seasons with more than 1,200 yards from the line of scrimmage, leading the league in 2007 with 2,104 total yards thanks to 1,333 yards on the ground and adding 90 catches for 771 as a receiver.

“The guy’s explosive,” Veach said. H”e has the ability to kind of make stuff out of nothing, and I think that’s the one thing you look at with these running backs. This guy can consistently make plays when there really is nothing there to be made. Again throwing him now with Tyreek (Hill) and Sammy (Watkins) and Travis (Kelce) and Damien Williams in the backfield and Mecole (Hardman) on the outside, we think it will be really exciting.”

Edwards-Helaire is also the latest in a line of Chiefs running backs matriculating from LSU. Spencer Ware and Darrel Williams both came from LSU, and Williams and Edwards-Helaire both played in the same backfield for the Tigers in 2017. LSU backs come into the league with experience in an offense comparable to the NFL against top-level competition in the SEC.

“That’s just the nature of it,” he said of the competition level at LSU. “Everybody comes in and competes, and it’s the same way in Kansas City, so I can’t wait to compete.”

It also doesn’t hurt that the bevy of running backs on the LSU roster means their backs came to the NFL with less wear and tear. Edwards-Helaire picked up 370 carries in three college seasons, far less than other top backs in this year’s draft. Ohio State’s J.K Dobbins (725 carries), Georgia’s D’Andre Swift (440) and Wisconsin’s Jonathan Taylor (926) all carried far heavier workloads in college than Edwards-Helaire.

Veach said the team’s scouts repeatedly received the same report about Edwards-Helaire from the LSU coaching staff: he’s all business, loves to play the game and picks up the game quickly. That makes Veach believe the 21-year-old can make an immediate impact for the defending Super Bowl champions.

“Everyone that you talk to at LSU, they rave about his football character, his football IQ,” Veach said. “Then you throw in the talent that he has with that, we think he can come in right away and be a big factor in this offense.”