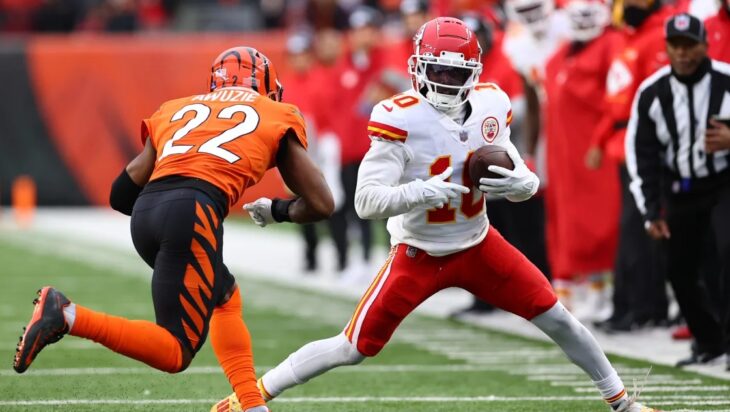 “His heel was sore after the game and it’s making a little progress the other way,” Reid said Monday after Hill aggravated his heel during pregame warmups on Saturday. “We’re anticipating he’s going to be OK to go.”

Reid also indicated positive news on the team’s other injury situations. Running back Clyde Edwards-Helaire, who has missed the past two games with a shoulder injury, is “making great progress,” Reid said. He could be back on the practice field Wednesday when the club begins workouts for the Wild Card game.

“I think we’ll be able to get a little work out of him this week,” Reid said. “We’ll see, we’ll see how the next couple of days go. He’s got a great attitude and wants to be out there.”

“It’s still a little tender but he’s working through that,” Reid said. “We’ll just see how he does this week but I would anticipate he would be out going.”

Reid also dismissed any issues regarding tight end Travis Kelce and linebacker Willie Gay, both of whom showed signs of discomfort during the fourth quarter of Sunday’s win over Denver.

The Chiefs could also be close to getting back three other players this week for the postseason run. Defensive end Joshua Kaindoh was designated to return from injured on Dec. 22 and his three-week practice clock expires this week. He suffered a high-ankle sprain in Week 4 against Philadelphia.

Kaindoh is expected to return to the active roster in the next few days. The club currently has an open position after placing offensive lineman Lucas Niang on injured reserve on Friday.

Last week the team designated cornerback Chris Lammons (ankle) and defensive tackle Khalen Saunders (knee) to return from injured reserve. Both players still have two weeks remaining in their practice windows but are eligible to return at any time. The club would have to make a roster move for either Lammons or Saunders to rejoin the active roster.