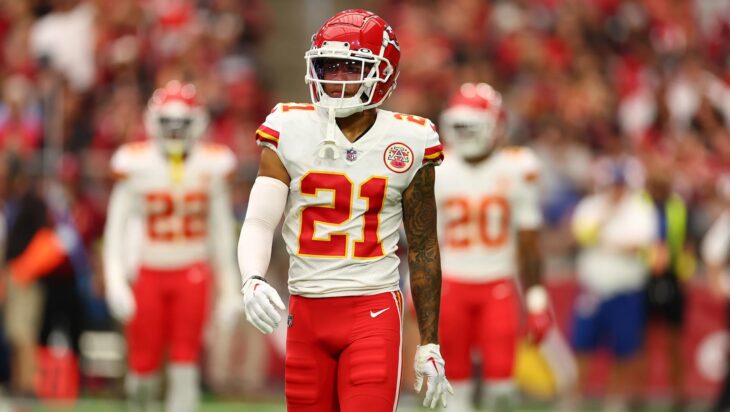 KANSAS CITY, Mo. — The hamstring injury suffered by cornerback Trent McDuffie Sunday will keep him out for at least the next four games after the Chiefs placed him on injured reserve Tuesday.

The team also made a flurry of other roster moves Tuesday afternoon, including the promotion of linebackers Elijah Lee and Jack Cochrane from the practice squad to the 53-payer active roster. Those moves fill out the 53-player roster which had a vacancy after the club placed tight end Blake Bell on injured reserve last week.

Ammendola was added to the practice squad as insurance for kicker Harrison Butker, who suffered a left ankle sprain while kicking off against Arizona Sunday. Butker returned to the game to kick a 54-yard field goal and kick extra points but safety Justin Reid handled kickoff duties following the injury. The team has until 3 p.m. central Thursday to determine whether to elevate Ammendola from the practice squad for that night’s game against the Los Angeles Chargers.

Head coach Andy Reid on Tuesday explained that Butker continued to have swelling in his left ankle.

“I think if it was just a pain thing, I think he would bear through that but he’s got some swelling,” Reid said. “I think it’s a matter of him being functional enough to do it. He’s a tough kid and that. We’ll just see how that works out.”

The Chiefs conducted a kicker tryout on Monday with Ammendola emerging the winner from a group that included former Chiefs kicker Elliott Fry. When Butler landed on the COVID-19 reserve list last season, the club signed Fry, who hit three field goals and converted three of four PAT attempts in a 36-10 win over Pittsburgh in Week 16.

Reid say he’s comfortable going with Ammendola as plan B.

“I think we’ll be OK,” Reid said. “I’m going to probably with both sides of my mouth here because I’ve said before that I think that time they have together is important but we did have success with it last year, so we’ll just see where all this goes.”

The loss of McDuffie is disappointing for the Chiefs, who have high expectations for the 2022 first-round draft pick. The rookie played 32 snaps on Sunday and wasn’t targeted by the Cardinals in 21 pass defense snaps. The departure of McDuffie likely means fellow rooking cornerback Joshua Williams will step in as the nickel corner, entering the game in substitution packages on the left side of the defense with starters Rashad Fenton on the right side and L’Jarius Sneed in the slot.