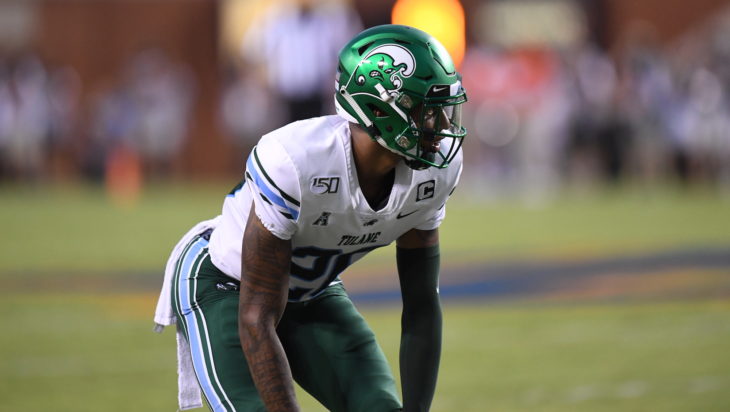 KANSAS CITY, Mo. — The Chiefs added a second cornerback to the 2020 draft class, making a deal to move into the seventh round in selecting Tulane’s BoPete Keyes.

The Chiefs sent their 2021 sixth-round selection to Tennessee in exchange for the No. 237 overall pick in the seventh round of this year’s draft. Chiefs area scout Willie Davis said the club made the move because they expected a bidding war for Keyes as a priority free agent they did not expect to win.

“To jump back in in the seventh round and get him like that, that was big for us because there were teams that were going to come after this kid,” Davis said.

His real first name is Thakarius (pronounced “Thack-air-ee-us”) but Keyes more prominently goes by the nickname BoPete. His grandmother called him that once, and the nickname stuck. “No one calls me Thakarius unless they’re mad at me,” Keyes said.

A latecomer to the game of football, Keyes picked up just a single scholarship offer to Jackson State and initially signed with East Mississippi Community College. Tulane came calling later, however, and lured Keyes to the Green Wave. He picked up 85 total tackles in 13 games as a starter the past two seasons while interception two passes and breaking up 20 others.

At nearly 6-foot-1 and 202 pounds with a 78 1/4-inch wingspan, Keyes possesses the size and length the Chiefs prize in their cornerbacks. Davis saw Keyes maturity and growth in Keyes during his four seasons at Tulane that makes him believe he continuing developing in the NFL.

“The kid, every year he improved,” Davis said. “Just more knowledge about the game, the sport. The way he decided that the best thing that he did he worked on, and that’s getting up in people’s face, getting his hands on them, and I think he figured it out that will help him with the more smaller speedier receivers.”

Keyes certainly views himself as an aggressive corner who can also play off the ball in zone coverage as well. He also sees similarities between himself and one of his new teammates.

“I feel like it will be a great experience working with Tyrann Mathieu because I see somewhat of his game, his game style and my gameplay are kind of similar,” Keyes said. “We both like to ballhawk, get to the ball and we can come down and make tackles even if we’re not in the same spot, and we have the energy.”

Davis sees Keyes as an immediate contributor on special teams and perhaps contributing on defense late in the season once he grows comfortable with the defense and the coaching staff devises the best way to utilize his talents.

“I think he has a great shot of making it on special teams and then developing into that fourth corner,” Davis said. “He has that skill set. He has that mentality. He has that work ethic. I can see him contributing this year.”

Keyes certainly doesn’t lack in confidence. He never lost faith he would land with a team in the NFL, and he’s ready to embark on his new career.

“I know that I got drafted in the seventh round, but I’m just ready to get on board and ready to get on the field and do everything to show everyone that I potentially will be the best corner in the league soon,” Keyes said.