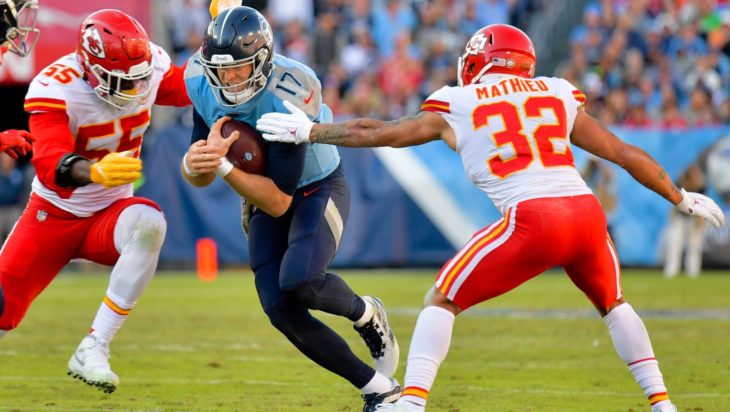 The Chiefs face another failure foe in Sunday’s AFC Championship game, and it’s another opportunity to vanquish a playoff team that beat them during the regular season.

Tennessee topped Kansas City 35-32 at Nashville in Week 10, but the Titans’ dominance of the Chiefs goes back much further. The Titans have won four-straight games in the series with three of the wins coming at Arrowhead Stadium. The Titans bounced the Chiefs out of the playoffs two years ago with a 22-21 win at Arrowhead.

How can the Chiefs avoid another setback to the Texans? Here are the matchups and keys for Sunday’s championship game.

Henry steamrolled the Titans through their last two playoff opponents. He’s likely licking his chops after lighting up Kansas City for 188 rushing yards and two touchdowns in Week 10. While the Chiefs can’t completely shut down this human bulldozer, they must avoid allowing him to rush for more than 8 yards per carry. That requires a full defensive effort. With one game standing between Kansas City and the Super Bowl, this isn’t the time to make business decisions and turn down opportunities to square up the physical, bruising back.

The Chiefs allowed just two sacks in the first matchup between these teams, although the Titans were missing one of their best players on the defensive line in Jurrell Casey. The Titans have been turning up the pressure on opposing quarterbacks of late, sending extra blitzers, disguising from where the rush comes and using twists and stunts to create free rushers.

Jackson is the one Titans corner with the speed and quickness to almost match Hill. Despite these two getting matched up frequently in Week 10, Hill racked up 11 receptions for 157 yards and a touchdown. Look for the Titans to have a few tricks up their sleeve to try to slow Hill down and give Jackson a better chance.

Kelce has been in a groove in recent weeks and playing like a man possessed. In the previous meeting between these teams, Kelce had seven catches for 75 yards and a touchdown on a shovel pass. He did most of his work against zone, finding a soft spot between the linebackers for easy completions. The linebackers will likely pay closer attention to him in the middle of the field in this contest.

The defensive-minded Titans’ head coach Vrabel, a member of the Bill Belichick coaching tree, has faced off with offensive guru Andy Reid multiple times in his career, both as a player and coach. Through all these meetings, Vrabel has had to get a feeling for how to attack a Reid-led offense, and likewise, Reid has developed a sense of Vrabel’s defensive game plan. The key to this game might rest with the coordinators that control the side of the ball opposite their head coach. Chiefs’ defensive coordinator Steve Spagnuolo owns a Super Bowl ring from his defense slowing the prolific Patriots offense. Titans offensive coordinator Arthur Smith is in his first year as a coordinator in his career. The Chiefs have the coaching advantage but expect this to be a fun chess match all game long as Reid and Vrabel match wits with their team’s stronger units.

Henry becomes a more dominant runner when he gets momentum behind him. The Chiefs have to control the line of scrimmage, building a wall with no holes, causing Henry to hesitate and stringing plays out to the sidelines. The more Henry must work laterally instead of downhill, the better chance the defense has to stop him from running for 10-plus yards per carry.

On the flip side, the Chiefs’ offensive line needs to win their matchups and keep quarterback Patrick Mahomes upright so he can shred the Titans’ defense. The Titans will bring a variety of blitzes from their talented front seven testing Mahomes’ protection.

Knock The Train Off The Track

Defenders can’t tackle Henry high and allow him to use his devastating stiff arm to keep tacklers at bay or simply run through arm tackles. To bring this big man down, the Chiefs must take his legs out from under him. The aiming point for the defense should be his thighs and below. Equally as important is to treat Henry like a bull rider, holding on tight and waiting for reinforcements to gang tackle him.

The sixth-seeded Titans have little to lose and everything to gain by playing loose and aggressive, including going for it on fourth down and pulling out trick plays. The Chiefs have been burned by trick plays a few times this season, including last week against Houston on a fake screen. The Titans let Henry throw a jump pass last week at the goal line, and you can be sure they have something special dialed up for this game.

A few plays in the first matchup kept Tennessee in the game and eventually led them to the win. A Damien Williams fumble led to a defensive touchdown, Henry delivered a 68-yard touchdown run and wide receiver Kalif Raymond hauled in a key 52-yard reception. Kansas City’s special teams’ fiascos, including a blocked field goal at the end of the game, all played a role in the Chiefs’ loss. Cut out just a few of those big momentum-changing plays and the Chiefs win.

Amidst last week’s furious rally from a 24-point deficit, Mahomes inspired his teammates to take “one play at a time, do something special.” That message should resonate this week as well. The Chiefs must take the game play-by-play and maximize the most of their individual opportunities if they want to finally bring the Lamar Hunt Trophy to Kansas City.