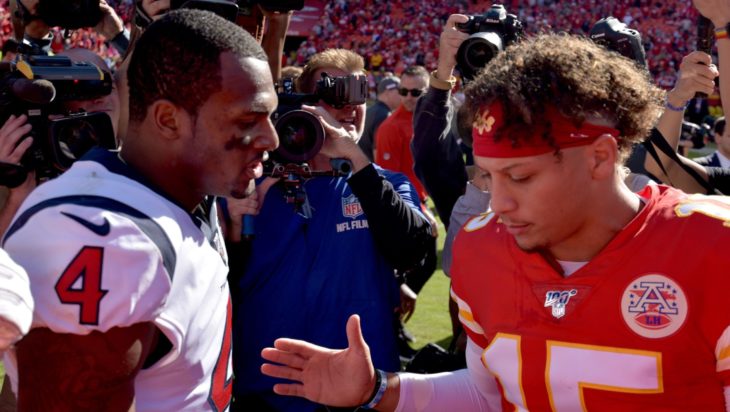 The Chiefs and the Houston Texans meet in Sunday’s AFC Divisional Round playoff game at Arrowhead Stadium, and don’t be surprised if the game comes down to a showdown between quarterbacks Patrick Mahomes and Deshaun Watson.

When the teams met back in Week 6 of the regular season, Mahomes staked his team to a 17-3 first-quarter lead with 168 yards passing and two touchdowns. But Watson had the last laugh, rallying his team on 15-of-18 passing for 141 yards in the second half for a 31-24 win.

Who will win Sunday’s rematch? Here are the matchups to watch and keys to victory for the Chiefs.

The physical Roby is playing some of his best football of his season right now. He will jam receivers at the line of scrimmage when pressed, and it’s an effective move when it works. If the receiver beats the jam, however, it’s off to the races. Hill will more than likely see the free safety shaded to his side of the field when Roby lines up against him. Hill should get loose for a big play at least once in this matchup.

Schwartz did a fairly good job of containing Watt back in Week 6. Watt’s quick comeback from a pectoral injury provides this defense with a boost from both his leadership and relentless assault on opposing quarterbacks. Luckily for the Chiefs, they have one of the best right tackles in the game to try his hand at limiting Watt’s impact.

The Chiefs tried to isolate and target Cunningham back in Week 6 with one of their running backs when he lined up in pass coverage. They forced him to work through traffic to cover the routes in the flats and tested him deep a few times, narrowly missing a few connections. Expect the Chiefs to take another look at this matchup Sunday.

The Texans have incorporated more pulling linemen and tight ends into their blocking scheme of late. A majority of the time a pulling blocker will lead the running back into the hole. The Chiefs’ linebackers will be forced to fight through the block in making the tackle. If they can’t shed the block, they have to hold their ground and plug the hole in forcing the runner to bounce, or else the Texans will run wild.

Mathieu is the ultimate utility player in this defense. His coverage and blitzing skills are elite, and his quick mental processing allows him to fly all over the field making plays and creating havoc. His presence allows defensive coordinator Steve Spagnuolo to play chess while the opponent’s offense is stuck playing checkers. Expect Mathieu to give Watson a variety of looks as he tries to bait the young quarterback into making a mistake.

Start Fast and Don’t Let Up

The Texans have a tendency to start games slow before Watson finds his groove and the offense explodes. If the Chiefs can get out to a big early lead, it forces the Texans to become one dimensional, allowing the pass rush to pin its ears back and get after Watson. The Texans rallied from 14 points down against Kansas City in Week 6 and came back from 16 points last week against Buffalo. The Chiefs need to keep pouring it on even with a comfortable lead.

Don’t Let Texans Get A Spark

The Texans used a tough second-half defense to ignite last week’s comeback against Buffalo and fuel their overtime victory. The Chiefs can’t let Houston get in the game with game-changing plays. Mahomes and the offense must avoid turnovers while the defense can’t allow big chunk plays to Watson and his running backs.

Watson has an incredible ability to take a huge hit in the pocket, Houdini away from a sure tackle and make a back-breaking play. Kansas City must find a way to contain Watson, limiting his escape routes from their pass rush, force him to scramble to his left and not let him slip through sack opportunities.

The Chiefs have several options at their disposal to keep the Texans off balance. Pre-snap motion can force the Houston defense to adjust, leaving their corners trailing the motion receiver or their linebackers shifting away from where the running play attacks. Kansas City also needs to move the pocket for Mahomes to keep the aggressive Texans’ pass rushers from having a set aiming point every time.

The Texans rotate coverages between cover 2, cover 3 and man free. Their man coverage is generally pretty sticky, but the zone coverage is very soft and easily beat. The Chiefs offense can move the ball effortlessly if they aggressively attack the Texans when they decide to run zone coverages.