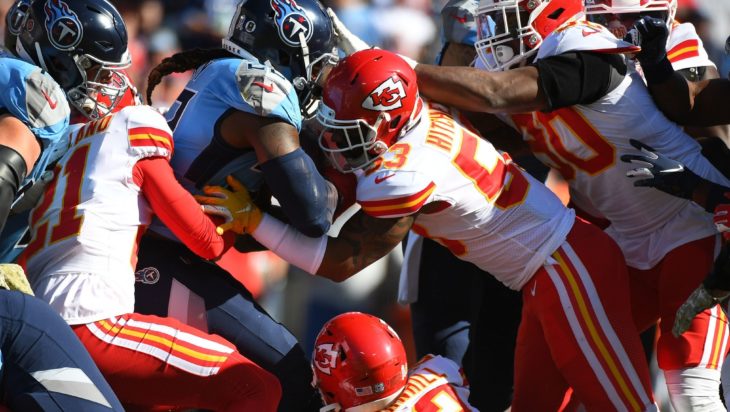 The Tennessee Titans leaned heavily on their running game through their first two playoff wins, piling up 418 yards rushing. Their ground attack starts with an offensive line able to keep defenders away from star running back Derrick Henry long enough for him to build up momentum.

Every part of the Titans offense revolves around Henry, and don’t expect anything different when they battle the Chiefs in Sunday’s AFC Championship game.

Once Henry gets rolling, the odds of bringing him down drastically decline. Henry does the majority of his damage outside the tackles, using stretch runs to spread the defense out, opening up cut back lanes or allowing him to be one-on-one with a defender in the hole.

Quarterback Ryan Tannehill resurrected his career in Tennessee, although the Titans haven’t asked to do much in the playoffs because of the effectiveness of the running game. His mobility allows him to extend plays and even pick up yards with his legs.

Tannehill is a reliable passer who throws a majority of his passes between the numbers and under 20 yards. He lacks a consistent deep threat, leading to his underwhelming completion percentage on passes traveling over 20 yards. He completed 2-of-6 deep shots against Kansas City in the first matchup and 1-of-5 against Baltimore last week, although that one deep ball went for a 45-yard touchdown to receiver Kalif Raymond.

Tennessee’s pass catchers don’t make headlines outside of rookie receiver A.J. Brown. Brown’s productivity exploded when Tannehill took over under center, putting him in the mix for rookie of the year. Former first-round pick Corey Davis hasn’t lived up to his potential, mostly due to injuries and poor quarterback play his first three years in the league.

Slot receiver Adam Humphries was a free agent addition this offseason, and his potential from a high-ankle sprain should provide the Titans with a weapon in the middle of the field and in the red zone. Raymond made a few big plays this season, including one against the Chiefs in Week 10. He is the speedster on this offense. The tight ends for Tennessee are used sparingly but can hurt a defense, particularly in the red zone.

Henry serves as the focal point of the offense. Stopping him is the key to disrupting the Tennessee game plan. The Chiefs have to set the edge against his stretch runs, forcing him to cut back into the teeth of the defense. He is a good cutback runner, but only when it’s a choice and not a necessity. If he is unable to see a hole and build momentum through it, he becomes a lot easier to bring down. The defenders need to aim for him thighs and lower to avoid being shrugged off or stiff-armed. They need to wrap up and hold on, waiting for their teammates to help gang tackle.

Brown is also tough to bring down once he gets the ball in his hands. Most of Brown’s production comes after the catch, so the Chiefs need to get him on the ground or he could take it the distance. Raymond can take the top off the defense, but he doesn’t get usually get enough targets in the offense. The secondary keeping a ceiling on him will minimize his potential impact. If the Titans get into the red zone, the Chiefs need to be aware of the tight ends and Humphries.

The defense should focus on making the Titans get out of their comfort zone. Tannehill wants to work between the numbers with the short-passing game, so that area of the field should be heavily covered, forcing the ball outside the numbers and deep.

Kansas City can use twists to attack the right side of the offensive line when they are in pass protection. Left guard Roger Saffold is susceptible to quick rushers with good hand usage, and right guard Nate Davis gives up ground when facing a power bull rush. The Chiefs can also send a slot blitz to get quicker pressure on Tannehill. If the Chiefs can get the Titans out of their game plan by slowing down Henry, forcing outside throws and getting pressure on Tannehill, they have a shot to run away with this game.