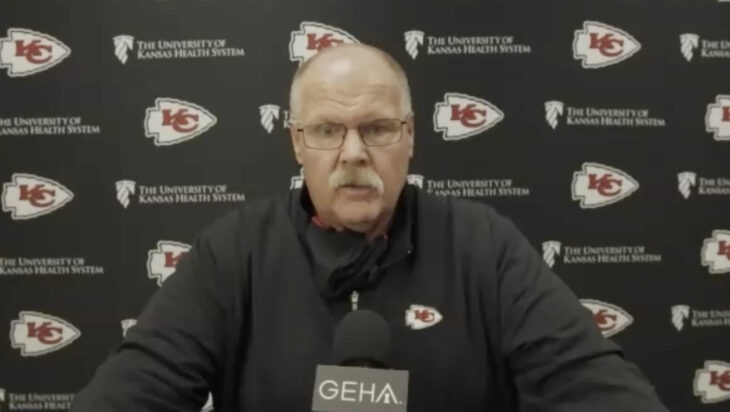 The NFL kicked off the first phase of its offseason program for the 2021 season on Monday, with Chiefs head coach Andy Reid gathering his squad for the first in a series of virtual meetings as the league navigates a showdown with players over the virtue of in-person workouts.

“We’ll have a two-hour block there where we can visit with the players on the actual scheme evaluations that we’ve been going through as a staff here on this past season,” Reid explained during his annual offseason inaugural press conference on Monday. “That’s always an interesting time because you can go through and make yourself a better football team if you approach in the right way. That’s what we’re working towards.

“In this still pandemic era here, we’re working through it the best way we possibly can.”

The continuing pandemic is what has placed this year’s offseason program in a state of limbo. Players representing more than half the teams in the league have issued statements indicating they won’t take part during in-person workouts during the voluntary offseason program, citing the risk to

On Monday, the Minnesota Vikings became the 20th team in the league with players issuing a joining statement to reject in-person voluntary workouts called for under the terms of the collective bargaining agreement between the league and the NFL Players Association.

“Given the ongoing threat of Covid-19 and the inadequate safety procedures recommended by the NFL, this is the safest path forward for us and our families,” read the statement issued on behalf of Vikings players by the NFLPA.

Chiefs players haven’t issued such a statement, although voluntary workouts are more valuable to the club’s players than most teams in the league. The Chiefs have 25 players — trailing only Buffalo with 28 — with workout bonuses tied to voluntary offseason workouts totaling $3.053 million. That includes the likes of defensive linemen Frank Clark and Chris Jones with $500,000 bonuses, receiver Tyreek Hill ($325,000), and safety Tyrann Mathieu, tight end Travis Kelce and offensive lineman Mike Remmers ($250,000 each).

Some players are choosing to work out at the club’s training complex. That includes quarterback Patrick Mahomes, who is continuing his rehabilitation from offseason toe surgery. He understands the concerns players have regarding the safety of in-person workouts at this time.

“I know coming in today and having to sit and wait for test results to get back in, and we only have a couple people here today,” Mahomes said on the first day of the offseason program. “I know it’s going to be crazy once we get the whole roster here, so trying to figure out what’s best not only for myself, not only for the Chiefs but what’s best for the teams around the league.”

The offseason program constructed by Reid has allowed the club and its players to avoid any confrontation for now. Players can work out on their own while participating in virtual meetings without risking their workout bonuses.

The NFL issued revised guidelines for this year’s offseason program on April 14, and Reid said he reached out to players to let them know his plans for the offseason program. Coaches and players will meet virtually during phase one of the program, which runs through May 14. Up to 10 players at a time may work out voluntarily in team weight rooms, and players may work out on the field provided no footballs are used and no coaches are in attendance.

“Things got kind of finalized right here at the end, but I trust our guys are going to work out and get that part done,” Reid said. “I trust that they’re going to be on the calls for right now, which I think is important.”

What remains unknown is what happens when the league moves to phase two of the offseason program. Starting May 17 teams are permitted to conduct onfield workouts in addition to virtual meetings. The third phase running from May 24 to June 18 includes a three-day rookie minicamp, 10 organized team practice activities (OTAs) and a mandatory three-day minicamp.

The NFLPA maintains that OTAs pose a health risk to players. Association president J.C. Tretter argues that the loss of offseason workouts last season didn’t lower the quality of the play.

Reid has adjusted his teaching methods to fit the virtual world but he believes the lack of workouts hurts player development, especially for newcomers to the league.

“The most valuable thing though that you get when you’ve got the players here that you can’t get virtually is the on-field experience,” Reid said. “Being able to teach Willie Gay coming in as a rookie how to move and how to drop and your fundamentals and techniques, the different coverages that he’s got to take care of, run-fit responsibilities. When you’re not hands-on it’s hard to walk through those things, so you end up retarding the first-year players, second-, third-year players a bit by only being able to do it virtually. “

The lack of OTAs can also pose a detriment to teams such as the Chiefs that thrive on creativity.

“You’re able to give the players some new thoughts through all the scheme eval that you discuss with them,” Reid explained. “‘Hey listen, let’s try this. Let’s just take a look at it, let’s see what it looks like.’ If it’s no good, we can throw it out there rather than wasting time during training camp going over it.”

In the end, however, Mahomes believes the league and its players have time to develop a meaningful protocol satisfactory to both sides.

“We still have a little bit of time to think about it and figure out what the best plan for us as a team, but we’re in talks with the NFLPA and we’re trying to figure out what’s best for not only us but for the entire league.”