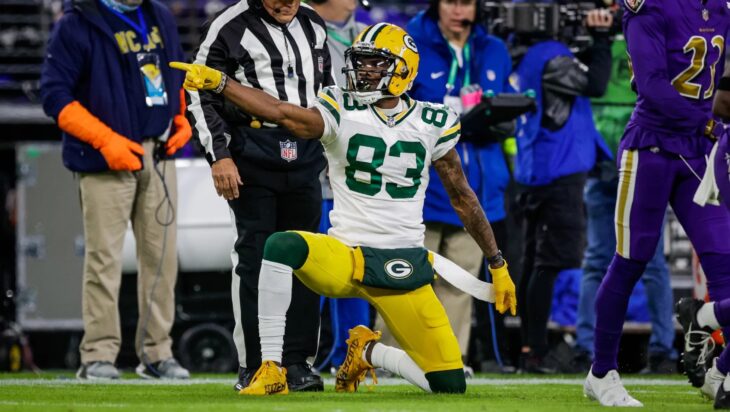 KANSAS CITY, Mo. — There’s no replacing Tyreek Hill but the Chiefs on Thursday at least turned the page to the next chapter of their story by signing with wide receiver Marquez Valdes-Scantling as the latest addition to their offense

The 27-year-old moves from the green and gold of Green Bay to the red and gold of Kansas City while swapping quarterbacks Aaron Rodgers for Patrick Mahomes.

His new three-year, $30 million contract with the Chiefs reportedly includes incentives worth up to an additional $6 million according to NFL Network. The del includes $18 million in the first two seasons.

Valdes-Scantling entered the league as a fifth-round pick of the Packers after stints with North Carolina State and South Florida in college. Known for his size (6-foot-4, 206 pounds) and blazing speed (4.37-second 40-yard dash time), Valdes-Scantling brings has averaged 17.5 yards per catch in his NFL career.

He also joins a wide receiver room in transition in Kansas City. The Chiefs have said goodby to Hill, Byron Pringle and Demarcus Robinson this offense. That trio accounted for 178 catches, 17 touchdowns and 2,071 yards, or 43 percent of the team’s passing offense.

Valdes-Scantling has averaged 31 catches, 538 yards and three touchdowns per season during his first four campaigns. He contributed 26 catches for 430 yards and three touchdowns to the Packers last season. He missed six regular-season games with a hamstring injury and did not play in the Packers’ postseason loss to San Francisco due to a back injury.

During his first three seasons, Valdes-Scantling emerged as one of the league’s premier downfield threats, leading the league in 2020 with an average reception of 20.9 yards. Since entering the league in 2018, he ranks tied for ninth with eight touchdown catches for more than 30 yards. Hill leads that category with 17 touchdowns, six more than any other player in the past four seasons.

He also posted the second-fastest speed of any ballcarrier during the 2021 season, hitting 22.09 miles per hour on a 75-yard touchdown catch against the Vikings in Week 11.

That’s why the Chiefs hope Valdes-Scantling can put together some of the plays that Hill made famous with Mahomes.