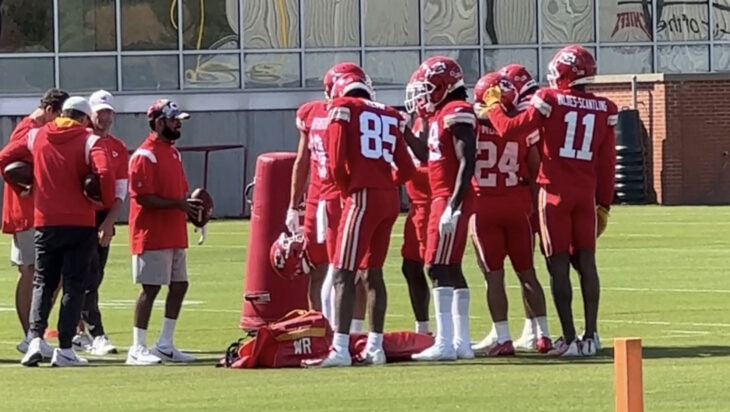 KANSAS CITY, Mo. — Three days after re-signing veteran Marcus Kemp to the practice, the Chiefs welcomed another familiar face into their wide receiver group with the return of Chris Conley.

While Kemp has spent parts of the past five seasons with the club since joining the Chiefs as an undrafted free agent in 2017, Conley was last on the Kansas City sideline in 2018 before signing a free-agent deal with Jacksonville and later landing with the Houston Texans. The Texans released Conley on Tuesday.

Head coach Andy Reid said there are no immediate plans for Conley, but he’s looking forward to getting both players back in the fold and seeing what develops.

Kemp spent training camp with the New York Giants before landing on injured reserve with a hamstring injury. The Giants released Kemp on Aug. 30 and he continued rehab on his own. Several clubs expressed interest in Kemp, including Arizona and Tennesee, but the allure of returning to Kansas City proved too compelling to turn down.

“I always find my way back here, don’t I?” Kemp said in the locker room Thursday. “I love it.”

Kemp played in 44 games with the Chiefs during the past five seasons, primarily as one of the club’s premier special teams performers. He played 782 special teams snaps for the Chiefs with 119 offensive plays. He has four catches for 42 yards in his career along with 20 special teams tackles.

When the Chiefs retooled their receiver group during the offseason, Kemp wasn’t sure there was a place for him anymore.

“There are not very many guys left from my class or before, so I wasn’t so sure that I’d make my way back here,” Kemp said. “But you build relationships with people in the building so it’s always welcome to be coming back here.”

The same is true for Conley, who played in 53 games with 34 starts for the chiefs in four seasons after the club selected him in the third round of the 2015 NFL Draft. Conley caught 104 passes forthe Chiefs for 1,238 yards and six scores. His signature play with the Chiefs arguable occured in the 2018 home opener when Conley found open space in the end zone and a scrambling Patrick Mahomes found him for a touchdown against the San Francisco 49ers.

Kemp said returning to Kansas City along with Conley was a comfortable feeling.

“For him to comeback at the same time, it feels like we’re kind of getting the band back together,” Kemp said. “We get to hang out like old times. Both of us are under different circumstances so it’s a little bit different but I’m sure we’re both happy to be in this situation that we’re in right now.”