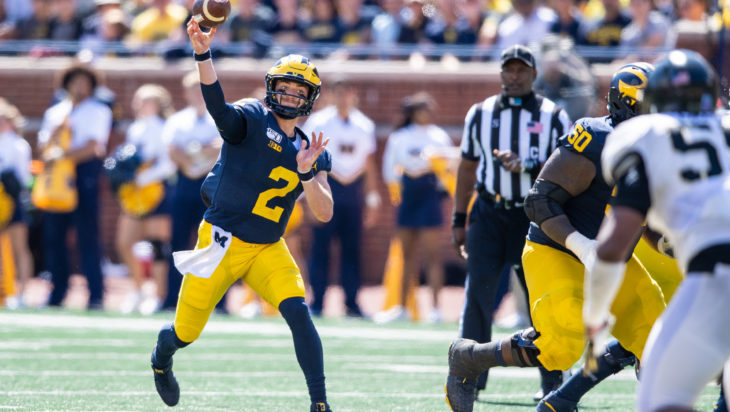 KANSAS CITY, Mo. — The Chiefs added a fourth quarterback to the mix on Sunday, agreeing to terms with undrafted free agent Shea Patterson from Michigan.

Patterson led Michigan to a 9-4 record last season and a top-20 finish. He finished his college career with 8,800 passing yards, 68 touchdowns and 27 interceptions while completing 60 percent of his passes.

The 6-foot-1, 212-pound Patterson started his collegiate career at Mississippi, where he was teammates with fellow Chiefs quarterback Jordan Ta’amu. Patterson suffered a torn PCL during the 2017 season, which led to Ta’amu taking over as the starter. Patterson transferred to Michigan following the season.

Patterson ranked as one of the top undrafted quarterbacks in the 2020 draft class. His athleticism includes a strong arm, nimble footwork in the pocket and an ability to take off on when necessary while throwing on the run. He rushed for 471 yards and eight touchdowns in his college career.

The 23-year-old Patterson was selected by the Texas Rangers in the 2018 MLB Draft in the 39th round. He spent time with the club during spring training in 2019.

Patterson replaces quarterback Kyle Shurmur on the roster. The 2019 undrafted free agent from Tennessee was released by the club last week. Patterson’s addition gives the Chiefs four quarterbacks on the roster along with Ta’amu, Patrick Mahomes and Chad Henne.