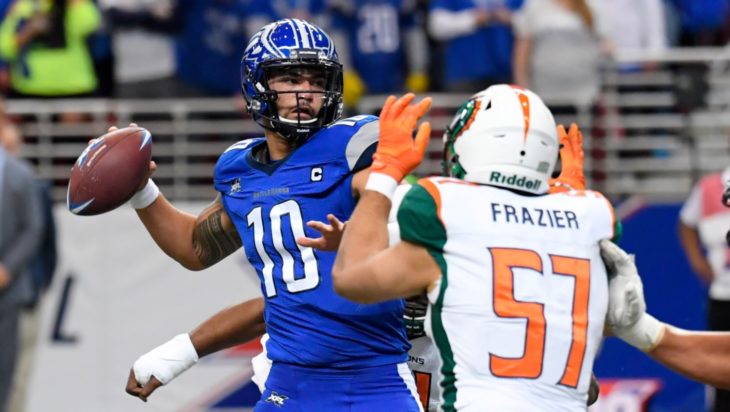 KANSAS CITY, Mo. — Limited cap space didn’t stop the Chiefs from adding to their depth at quarterback, agreeing to a deal with one of the leading passers from the XFL.

Jordan Ta’amu joins the club after a successful stint with the St. Louis BattleHawks of the upstart football league. The XFL officially canceled its inaugural season on Friday, with all players becoming free agents eligible to sign with NFL teams starting Monday.

Ta’amu started led St. Louis to a 3-2 start before the season concluded, ranking third in the league with both a 101.3 passing rating and 1,050 passing yards. The 22-year-old completed 72 percent of his throws with five touchdowns and two interceptions, while also rushing for 217 yards and a score.

The Pearl City, Hawaii native entered the professional ranks in 2019 as an undrafted rookie free agent with the Houston Texans. After not receiving any Football Bowl Subdivision offers out of high school, Ta’amu took the junior college route at New Mexico Military Institute. He won the Southwest Junior College Football Conference Player of the Year in 2016, piling up 3,014 passing yards with 32 touchdowns.

Ta’amu transferred to Mississippi in 2017, where he was teammates with Chiefs defensive lineman Breeland Speaks. He expected to back up starter Shea Patterson as a junior but stepped into the starting role after Patterson went down with an injury. He started 12 games as a senior, completing 64 percent of his passes with 3,918 yards, 19 touchdowns and eight interceptions. He also rushed for 342 yards and six scores. His 9.5 yards per passing attempt ranks No. 7 in NCAA history according to Sports Reference.

Ta’amu possesses a strong arm, ranking second in the XFL with 7.8 yards per attempt. Scouting reports coming out of college indicated struggles with defensive recognition and indecisiveness that results in holding the ball too long. He led the XFL in taking 12 sacks for 81 yards in five games.

But Ta’amu brings an NFL-caliber arm and experience in the SEC to Kansas City, where he expects to compete with fellow SEC alum Kyle Shurmur for the No. 3 quarterback role behind starter Patrick Mahomes and backup Chad Henne.