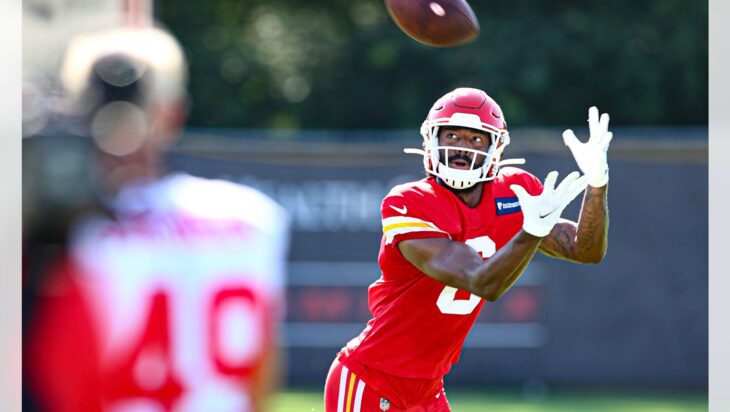 KANSAS CITY, Mo. — The Chiefs made a move to shore up their depleted receivers group on Saturday, returning wide receiver Marcus Kemp to the active roster while freeing up space in waiving safety Tedric Thompson.

Kemp has played seven games for the Chiefs this season, catching one pass for 11 yards while serving as a core special teams player in each of those contests.

The 25-year-old Kemp rejoined the Chiefs in August after returning from an ACL injury suffered in a preseason game in August 2019. He spent the first four weeks on the 53-man roster before being waived Oct. 6 to clear the way for cornerback Bashaud Breeland to return from his four-game suspension. The Chiefs used two standard roster elevations and a COVID-19 elevation from the practice squad on Kemp.

Teams are allowed to use the standard elevation from the practice squad two on a player per season, and the club had exhausted both options with Kemp and fellow receiver Gehrig Dieter. Kemp could only return to the game-day lineup as a member of the 53-man roster.

Kemp adds depth to a receiver group depleted by injuries. The club placed Byron Pringle on injured reserve earlier this week with an ankle injury. The team expects to have Sammy Watkins back from hamstring and calf injuries on Sunday for the first time since Week 5. Mecole Hardman also saw his first action on the practice field this week after a stint on the COVID-19 reserve list.

Thompson started the season as a key reserve in the Kansas City secondary but saw a decrease in playing time starting in Week 5 when he played just two defensive snaps against Las Vegas. Thompson was a healthy scratch for each of the team’s last two games.

He joined the Chiefs in July as a free agent after spending the past two seasons with Seattle. In eight games for the Chiefs, Thompson picked up 13 total tackles.