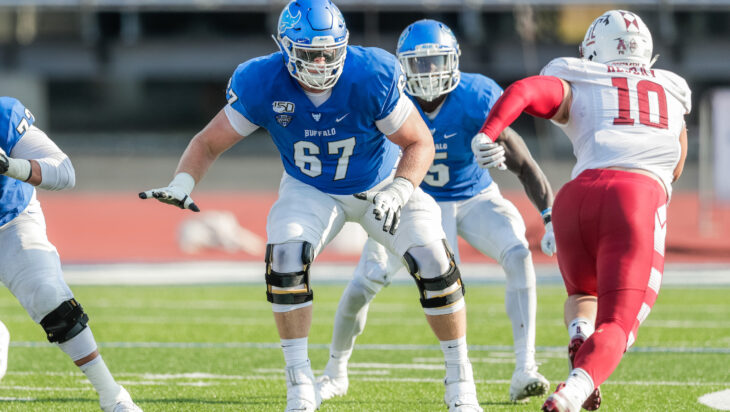 ST. JOSEPH, Mo. — The Chiefs bolstered their depth at offensive tackle heading into training camp with the signing of Evin Ksiezarczyk and David Steinmetz.

The club made room for the additions by placing wide receiver Justyn Ross on injured reserve.

The 6-foot-6, 310-pound Ksiezarczyk started 39 games at left tackle for the University of Buffalo before entering the NFL in 2020 as an undrafted free agent with the Atlanta Falcons. He also spent time on the practice squad of the Buffalo Bills, Washington Commanders and Minnesota Vikings over the past two seasons.

Ksiezarczyk took part in Monday’s final practice of the team’s three-day minicamp for rookies, quarterbacks and veteran players returning from injury. He earned All-MAC first-team honors as a senior at Buffalo, and the team’s offensive line was named honorable mention for the Joe Moore Award recognizing the top 15 offensive line groups in the country. The Bulls rushed for a school-record 3,256 yards behind Ksiezarczyk in 2019. The unit also allowed just eight sacks during his senior season.

The 27-year-old Steinmetz entered the league as an undrafted free agent from Purdue in 2018 with the Miami Dolphins. He also spent parts of the past four seasons with the Houston Texans and Washington Commanders, playing a total of four games for Washington in a reserve role.

The 6-foot-8, 321-pound Steinmetz spent three years at Rhode Island before finishing his college career in 2017 as a graduate transfer for the Boilermakers. He started 31 games in three seasons for the Rams.

Ksiezarczyk and Steinmetz arrive in Kansas City with the Chiefs in need of depth along the offensive line, especially at tackle. It remains in doubt whether left tackle Orlando Brown Jr. will report to camp on Monday evening. The club also will start camp with tackles Lucas Niang (knee) and Prince Tega Wanogho (leg) on the physically unable to perform list.

Ross heading to injured reserve will effectively end his rookie season with the Chiefs. The former Clemson star signed with the club as an undrafted free agent after a stress fracture in his left foot ended his final season with the Tigers. Ross participated in a portion of the Chiefs’ offseason program before requiring a second surgery on his foot.