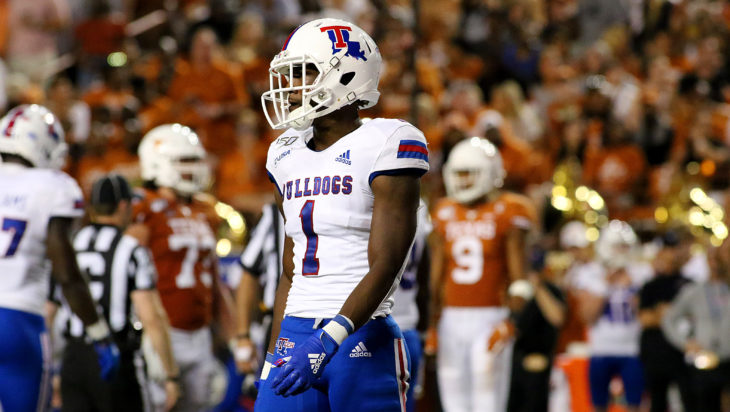 KANSAS CITY, Mo. — The Chiefs lost versatile defensive back Kendall Fuller via free agency in the offseason but the club may have landed his replacement with fourth-round selection in L’Jarius Sneed.

“You have long, fast kid with really good ball skills,” said Chiefs area scout Willie Davis. “Really smart, he understands how to play the position. He can play both press – he’s a long big kid that can get up in the face of receivers and play press corner – and he has the instincts and the knowledge to play off-ball also.”

Sneed spent three seasons at cornerback for Louisiana Tech before moving to safety his senior season. He earned All-Conference USA second-team honors while collecting 73 total tackles, including 3 1/2 for a loss, while also posting three interceptions and nine passes defended.

Watching Sneed play safety his senior season before moving back to cornerback for the NFLPA Collegiate Bowl in January showed Davis that the position change helped him develop as a defender.

“Now you see the intelligence and how he can pick up things and go play another position,” Davis said. “You don’t worry about him coming in and you’re putting too much on his plate as far as learning because you see now he’s capable of learning all that. Being that we needed to see that and he was able to do it, I think that really helped him out a lot.”

Sneed’s flexibility as a player extends back to high school, where he earned all-district honors as a receiver and defensive back before moving full-time to defense at Louisiana Tech. But he leaves no doubt that he views himself as a cornerback.

“I feel like I’m more natural at corner but I feel like safety helped me out a lot with my mental, helped me with the game a lot, helped me know the game well,” Sneed said. “Instead of just knowing my job I also have to know other guys’ jobs around me, and that slows the game down for me a lot.”

A native of Minden, Louisiana, Sneed grew up watching Chiefs safety Tyrann Mathieu play at LSU and in the NFL. He admires the energy with which Mathieu plays and hopes to emulate his work ethic.

“It’s going to be a great time to play with somebody like that who is going to motivate you to be better,” Sneed said. “Just soak all of it in from him, someone who knows the game more than me. Just to help my game improve a lot.”

Sneed expects to compete for a spot behind starters Charvarius Ward and Bashaud Breeland and nickel back Rashad Fenton. The Chiefs also return Alex Brown, who finished the season on the 53-man roster, and Chris Lammons, who served on the practice squad. The club also signed free agent Antonio Hamilton last month.