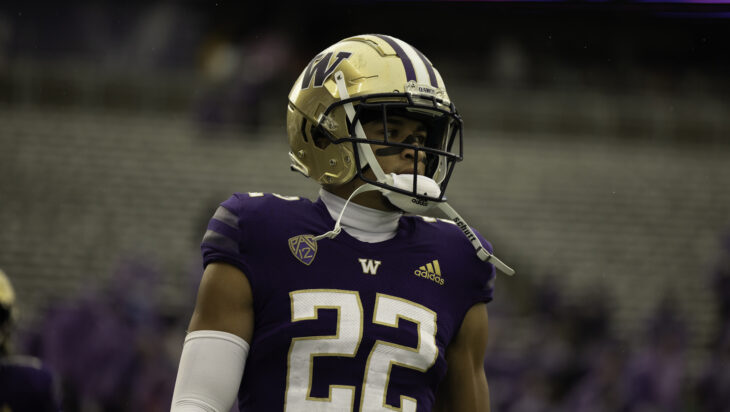 KANSAS CITY, Mo. — The Chiefs addressed one of the more glaring needs on defense with their first selection of the 2022 NFL Draft, moving up to land Washington cornerback Trent McDuffie at No. 21.

General manager Brett Veach said it was an easy decision to surrender some of their precious draft capital to land one of the best cornerback’s in this year’s draft.

“Trent’s a guy that can come in here day one,” Veach said following Thursday’s first round. “He’s wired the right way, extreme knowledge of the game, three-year player, three-year starter. And it was certainly a position that we wanted to address.”

McDuffie earned first-team All-Pac 12 honors last season and broke up 10 passes with two interceptions during his three seasons with the Huskies. The 5-10, 193-pound defender posted a 4.44-second 40-yard time at the NFL Combine.

When McDuffie was asked to describe how his skill set fits into the Chiefs’ defense, it becomes clear why the club felt he was their guy.

“I look at myself almost like a Tyrann Mathieu‐type of guy — someone who is going to be able to go in and play a bunch of different positions and just help out the team however I can,” McDuffie said. “That’s a big thing for me moving forward is just going in there with the mindset of ‘however I can get on the field, however I can help out this team, I’m going to do everything I can to do it.’”

NFL draft analyst Dane Brugler of The Athletic ranked McDuffie as his No. 2 cornerback in this year’s draft.

“Overall, McDuffie might not hit ideal size thresholds for some, but he is an easy sell in draft rooms because he has outstanding athleticism, intelligence and is well-schooled in various techniques,” Brugler wrote. “He has a high ceiling and a high floor and should start as an NFL rookie.”

Reid dismissed the concerns about McDuffie’s length — he’s 5-foot-10 with a 72 3/8-inch wingspan.

“He’s got enough size,” Reid said. “He’s played against big receivers and done a nice job. We thought that his size was fine there.

McDuffie played primarily on the outside at Washington, and that’s where Reid envisions him playing for now. McDuffie expects to compete with Rashad Fenton for the starting spot opposite L’Jarius Sneed and should be ready to play outside when Sneed moves into the slot. He also showed an ability to play different coverages which makes him a good fit for defensive coordinator Steve Spagnuolo’s multiple scheme.

While the Chiefs included McDuffie in their list of players with a first round grade, Veach said he and his staff never game planned a scenario where he might fall outside the top 16 selections. When the Patriots went on the clock at No. 21, Veach didn’t expect McDuffie to remain available until No. 29, particularly with the Buffalo Bills sitting at No. 25. Indeed, the Bills made a trade of their own, jumping two spots to No. 23 in selecting Florida cornerback Kaiir Elam.

“The way the board was falling and know we’re picking real late in this draft here, and the odds of a guy like McDuffie being at 21 let alone 29 were very low so we just thought it was the right time to make that move,” Veach said.

The last time the Chiefs selected a defensive player in the first round of the NFL Draft, it was also a cornerback from Washington. Marcus Peters was the team’s choice at No. 18 in the 2015 draft.

The trade leaves the Chiefs with nine selections remaining in the 2022 NFL Draft, including another first-round selection (No. 30). The club also still holds three other choices in the first three rounds: No. 50, No. 62 and No. 103 overall.