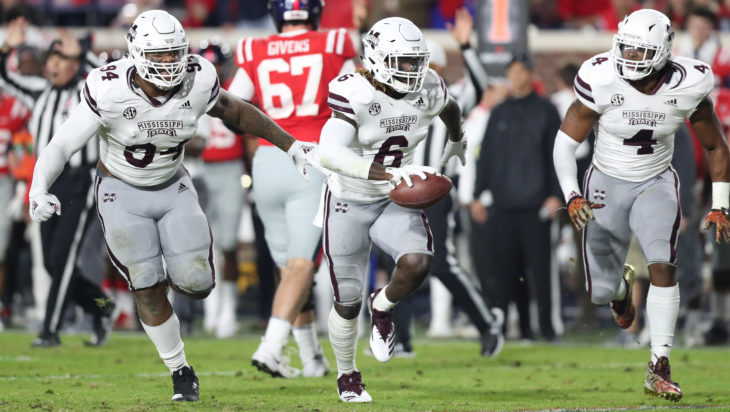 KANSAS CITY, Mo. — The Chiefs opted for bolstering a thin linebacking corps in Friday night’s second round of the NFL draft, choosing Mississippi State’s athletic Willie Gay Jr. with the No. 63 overall selection.

Head coach Andy Reid said the Chiefs feel they landed a first-round talent in a player who may have fallen down some team’s draft boards due to discipline issues in college.

“He was the linebacker we wanted, and it’s kind of weird how it all worked out and we were able to get him,” Reid said. “We were kind of holding our breath there at the end, but we’re sure glad we got him.”

Gay comes to Kansas City after a checkered three seasons for the Rebels, where he collected 99 tackles including 11 for a loss with three sacks in 31 games. He also broke up seven passes and intercepted two others, showing coverage skills the Chiefs badly need at linebacker.

The 22-year-old showcased dynamic athleticism in his limited college opportunities that made him a favorite for the Chiefs. The 6-foot-1, 243-pound linebacker posted a 4.46 40-yard time at the NFL Combine, the second-fastest time by a linebacker, trailing only Clemson’s Isaiah Simmons, a first-round selection by the Arizona Cardinals.

Reid describes Gay as “reckless” in the same manner as Tyrann Mathieu and Frank Clark and “that whole group on defense that cuts it loose and gets after people.”

“You watch the tape on him, and his one of those guys you go, ‘Who is that guy?’” Reid said. “He’s making plays all over the place.”

Gay started just six games for the Rebels, in part due to disciplinary issues that plagued him during his college career. He played just five games last season due to a suspension related to academic issues. He also reportedly engaged in a physical altercation with a teammate before a bowl game and received two ejections during his college career.

Reid said general manager Brett Veach and his scouting staff did their homework to address the discipline concerns to their satisfaction. He also believes that defensive leaders such as Mathieu, Clark and Anthony Hitchens will provide him strong guidance in the locker room.

“We felt very comfortable taking him at that spot,” Reid said. “It also helps to have the people in the locker room that we do with Tyrann and Frank. They’ll take him under their wing. Hitch, that whole linebacking group is a tight room is a very tight group. They’ll take him and make sure he’s in good hands there and teach him the right way how we do things in the National Football League.”