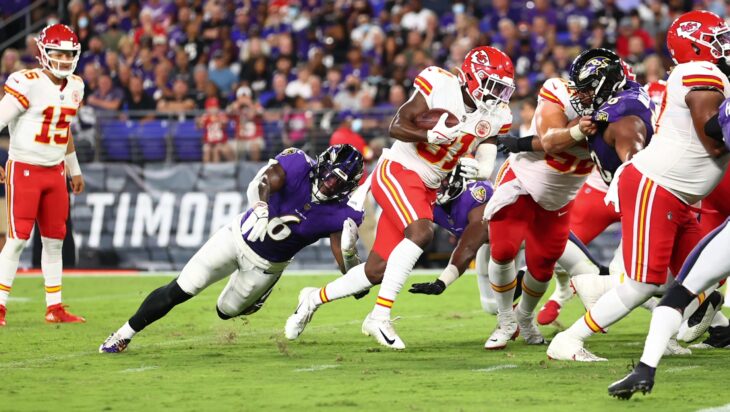 KANSAS CITY, Mo. — Less than 24 hours after the Chiefs’ 36-35 loss to the Baltimore Ravens, head coach Andy Reid found himself searching for fundamental fixes on both sides of the football.

The Chiefs yielded 251 yards on the ground against the Ravens, one week after giving up 153 rushing yards to the Cleveland Browns. While Kansas City escaped with a victory in Week 1, they couldn’t overcome defensive breakdowns that left the club ranked 26th in the league in tackling after two weeks according to Pro Football Focus.

How do you fix a fundamental such as tackling in the midst of NFL season? For Reid, the solution isn’t entirely physical.

“Some of that’s a mindset, not being so cautious, rallying to the ball, narrowing space for runners, again when you’re being blocked, shedding and then wrapping up,” Reid said. “Those are all important things, but some of it’s a mindset that you have to take care of.”

As a rookie in 2019, Juan Thornhill ranked third on the club’s defense in playing time, taking 996 snaps behind only Tyrann Mathieu and Charvarius Ward. But since tearing his ACL in the regular-season finale of his rookie campaign, Thornhill has seen sporadic playing time.

Case in point the first two weeks of this season in which Thornhill went from playing 56 snaps against Cleveland to just 11 snaps against the Ravens.

Some of this week’s lack of playing time for Thornhill can be explained by the Chiefs spending nearly half the game with three cornerbacks on the field and utilizing a base 4-3 more often than bringing in a third safety. But it remains abundantly clear the Chiefs consider Thornhill well behind starter Dan Sorensen on the depth chart.

“Juan and Dan (Sorensen), they do certain things the same and a couple things different but it all kind of equals out, and Dan really had the better camp and so on,” Reid said. “Maybe a little bit more consistency there, but we love Juan and where he’s getting himself back to where he was his rookie year.”

Despite the lack of playing time, Thornhill ranks sixth on the team with seven total tackles and is one of only three players on the team to break up a pass through the first two weeks of the season. Reid didn’t close the door on Monday to Thornhill getting on the field more.

“I don’t want to take anything away from the effort that he’s put forward to do that,” Reid said. “They all get a chance to play. I think we’ll take it step-by-step here, and you can’t have enough of those guys that can play.”

The Chiefs defense ranks dead last against the run but the Kansas City offense isn’t fairing much better, ranking 28th in the league with only 67.5 yards per game. In the second half against the Ravens, running back Clyde Edwards-Helaire and Darrel Williams combined for 9 yards on seven carries.

Two Chiefs’ drives in the second half were torpedoed by negative runs on first down that setup third-and-long situations. One of those drives ended with a Patrick Mahomes interception. Reid said the coaching staff is looking at a few solutions but he also believes chemistry between the backfield and the rebuilt offensive line is key to a more efficient run game.

“I think the more they do it, it will build confidence there and we’ll hit it even a little quicker than what we’re doing right now,” Reid said. “I would anticipate it getting better as we go on here. The losses where really the thing that probably hurt us. We had a little too much penetration on a couple plays and those put us in a bad situation.”

The Chiefs’ final drive ended with a fumble by Edwards-Helaire, the first of his NFL career after 264 touches including the regular season and playoffs. Reid said no one was blaming the second-year running back for the loss.

“The thing he’ll learn is as opposed to possibly switching arms, just keep that thing tight, just cover it with two hands and just roll,” Reid said. “But he’s not a fumbler, that’s not his deal, and he’ll be fine with it. I think all of the players have a lot trust in him. But he can learn. If we can learn from the mistakes we made, then we’re going to be a better team and you got to grow together.”

Defensive coordinator Steve Spagnuolo stressed the need to improve in the red zone this season but thus far those efforts have failed The Chiefs defense allowed a touchdown on all eight opponent drives inside the 20-yard line through the first two weeks.