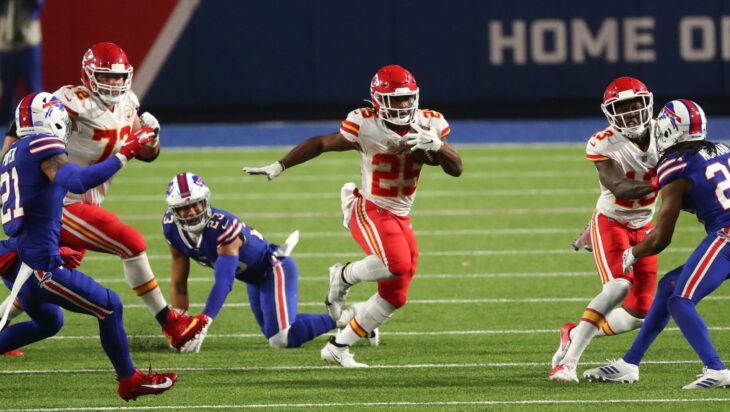 The Kansas City Chiefs didn’t look like a team in need of an upgrade in their offensive backfield during a 26-17 win over the Buffalo Bills Monday night, tallying 245 yards on the ground.

But a turbo boost is exactly what the Chiefs will get with former All-Pro running back Le’Veon Bell joining a running back room featuring first-round pick Clyde Edwards-Helaire, fresh off a 161-yard performance against Buffalo.

It seems like an embarrassment of riches for quarterback Patrick Mahomes and the Kansas City offense.

“He’s just going to be another weapon,” Mahomes said following Monday night’s win. “He’s someone who’s had tremendous success in this league for a long time now, and he’s still in the prime of his career. He’s 28 years old so he’s going to come in and make plays happen.”

Most of his new Chiefs teammates have yet to see or hear directly from Bell. He’s still proceeding through NFL COVID-19 protocols before he enters the locker room this week. He did post a message to Twitter during Monday night’s game as he watched the Chiefs backfield run wild against the Bills.

One teammate who did hear from Bell is Edwards-Helaire. The two shared a quick conversation by phone before Bell agreed to terms with the Chiefs on Thursday night. The rookie sees Bell as “another piece to the puzzle” and a veteran from whom he can learn.

“Ultimately anything I can do to pick his brain and gain any knowledge from him I’m there for it,” Edwards-Helaire said. “As fas as us talking, it was a quick conversation but ultimately he’ll be in the building next week so I’ll be able to talk to him more in person.”

So far Edwards-Helaire has been everything as advertised as the team’s first-round selection in the 2020 draft. His 505 rushing yards rank second in the league behind Tennessee’s Derrick Henry with 588. Yet head coach Andy Reid said Edward-Helaire took the news of Bell’s addition well, then responded with a career day on the football field.

“I think if you talk to Clyde, Clyde will sleep well tonight as I think the other backs will that one more guy, I don’t any of them will complain there,” Reid said.

Indeed, Edwards-Helaire wasn’t the only Chiefs running back to find plenty of room to work against the Bills. Darrel Williams rushed for 26 yards and a score on six carries, then added another 15 yards on a screen pass. Darwin Thompson delivered three tough runs for 17 yards.

That performance makes Mahomes salivate at the idea of adding Bell to the mix.

“We have days like today, having him, Clyde, Darrel, Darwin, all these guys that can come in and run the football, just keep going at the defense over and over again,” Mahomes said. “It will open up the passing game and help me out a little bit too.”

How Bell will fit in with the Chiefs offense remains to be seen. He would appear a natural fit in the team’s short-yardage and goal-line situation, where Edwards-Helaire is still a work in progress from a fundamentals standpoint. The Chiefs have proven in recent seasons that teams can never have too many good running backs, and Reid is excited to see Bell in action.

“We’ll see how he does,” Reid said. “He’s got to get in and get in the playbook and learn everything but he’s a pretty kid and been doing it a long time so I don’t think he will have a problem with that.”