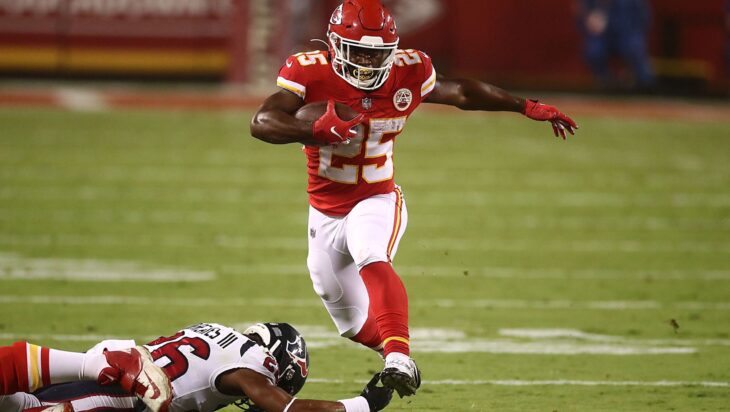 KANSAS CITY, Mo. — The Chiefs started their Super Bowl defense Thursday night with 19 starters who own championship rings from last season but it turned out players who only joined the team in April made huge contributions in a 34-20 opening win over the Houston Texans.

First-round draft pick Clyde Edwards-Helaire scored on a 27-yard touchdown run and tallied 138 yards on the ground, the eighth-most rushing yards in an NFL debut during the Super Bowl era. Fourth-round cornerback L’Jarius Sneed joined in the fun while picking off Texans quarterback Deshaun Watson and breaking up two other passes.

Edwards-Helaire made his presence felt in the run game immediately, taking the ball from Patrick Mahomes on the Chiefs’ first offensive snap of the season for a 3-yard run around the left side. He rushed four times for 25 yards in the first quarter, including an 18-yard run for a first down that helped set up the team’s first touchdown.

His marquee play of the day came on the opening drive of the second half. Guard Kelcehi Osemele and tackle Eric Fisher open up a huge hole on the left side, and Edwards-Helaire ran through a diving tackle attempt from linebacker Benardrick McKinney. That left only veteran safety Justin Reid crashing down, but Edwards-Helaire firmly planted his left foot and juked back to the right. That left Reid in his wake as he outraced defenders to the end zone.

“(Osemele) ended up pretty much getting everything cleared out, and then at that moment I only had one person to make miss as far as the safety coming down,” Edwards-Helaire said.

Safety Tyrann Mathieu, a fellow former LSU Tiger, is well-versed with Edwards-Helaire’s tricks of his trade. He’s watched him bounce off SEC defenders with ease, and saw more of the same on Thursday night.

“I think he’s going to continue to add to this offense and give us that spark that we need,” Mathieu said. “I felt like he really showed up today. We played a balanced game all the way around, I think he was a big part of that.”

The rookie finished the game with 25 carries; in last year’s running back by committee, no Chiefs running back rushed more than 20 times in any single game.

Reid said the game plan and situations dictated the heavy workload for the rookie.

“I feel like he’s had a good camp and he’s a heck of a player and we wanted to give him the ball, but we didn’t come in saying he’s going to get X number of carries, no,” Reid explained. “But we liked the mix we were able to get going with.”

Edwards-Helaire said he’s comfortable with any role Reid and offensive coordinator Eric Bieniemy design for him.

“I’m 100 percent comfortable with the workload,” Edwards-Helaire said. “Whatever coach Reid, EB, whatever they want as far as demanding from me, I’m there for it. I’m here to do my job, I’m here to play running back.”

The impact of delivering a dream performance in his NFL debut hadn’t quite sunk in yet for the rookie following the game.

“When I leave and head home, I think it will all start to hit then,” Edwards-Helaire said during his postgame press conference. “For the most part I’m still on my game feeling, still feeling like I could go out there and play two more quarters. I’m just kind of floating.”

Sneed shared a similar feeling about his promising debut.

“I was nervous when I first got out there, you know, just in my head,” Sneed said. “I trusted in my film studying over the week and my technique I’ve been doing all week, so I knew I was going to be alright.”

Sneed was targeted seven times in the game, allowing just two catches for 19 yards. He also ranked as the game’s fastest ballcarrier according to the NFL’s Next Gen Stats, reaching a speed of 21.38 miles per hour on his 39-yard interception return in the fourth quarter.

“I thought I was going to drop it, honestly,” Sneed said. “It was just floating. Those are the hardest balls to catch.”

Mathieu said he saw solid play from Sneed during training camp, but Thursday’s performance showed another level from the youngster.

“I did see him making tackles, making plays,” Mathieu said. “But to have a night like this, primetime TV, the whole world’s watching, all his family is watching, I’m just excited for him, happy for him going forward.”

Edwards-Helaire and Sneed weren’t the only rookies to get in on the fun. Fifth-round defensive end Mike Danna collected three solo tackles and narrowly missed picking up his first career sack in the fourth quarter. Undrafted rookie free agent defensive Tershawn Wharton from Missouri S&T tallied two stops in his debut.

Another undrafted rookie free agent, punter Tommy Townsend, averaged 45.3 yards on three punts, including a 54-yard boot and another kick that pinned the Texans at their own 5-yard line. Linebacker Willie Gay Jr., the club’s second-round selection, contributed a special teams tackle.

“For a first game there were some good things that were done,” Reid said. “Some great individual performances and some young guys that had some nice performances, so all in all a good day.”