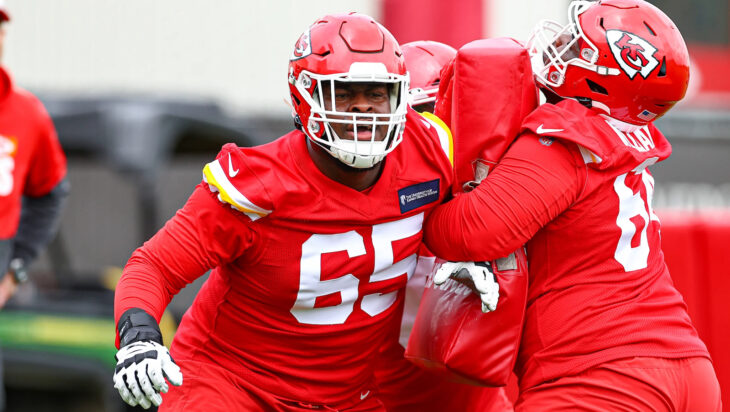 There was no hiding of the enthusiasm in the Chiefs’ draft room on day three of the NFL Draft when the club landed offensive lineman Trey Smith in the sixth round, and that excitement continued once the rookie took the field during organized team activity practices (OTAs).

Offensive line coach Andy Heck underscored that confidence in Smith on Thursday, proclaiming Smith “has starting guard in his future.”

“How fast that will be, that would be difficult to predict,” Heck said. “He has all the physical and mental tools that you look for and he loves football. That’s an indispensable quality. He loves football, he loves to compete and he’s an extremely physical person.”

Smith seems to have found a home quickly in Kansas City. He’s shown no signs of the jump from college to the NFL slowing him down, and he’s eager to soak up information from veterans such as Kyle Long.

“At the end of the day, it’s a veteran room,” Smith said during rookie minicamp last month. “It’s somewhere I know technique and just being an overall better football player is where I need to grow, and I think it’s a great setting and a perfect opportunity for me to grow in this program.”

Smith has worked at both right and left guard during OTAs. He’s not concerned about where he plays but rather more about developing his technique and learning the ropes.

“Ultimately, we come down to work every day and in regards to the expectation where I’m going to play, wherever they need me to play, I’ll do it to the best of my ability and be an asset for this organization,” Smith said.

Heck believes that Smith’s competitive fire and physical nature will bode well for him.

“These things jump out at you when you watch tape of him,” Heck said. “Now how fast can he learn our system, learn our techniques, really kind of quiet things down in there at that guard position, we’ll see. But he’s certainly off to a good start and working very hard at it.”