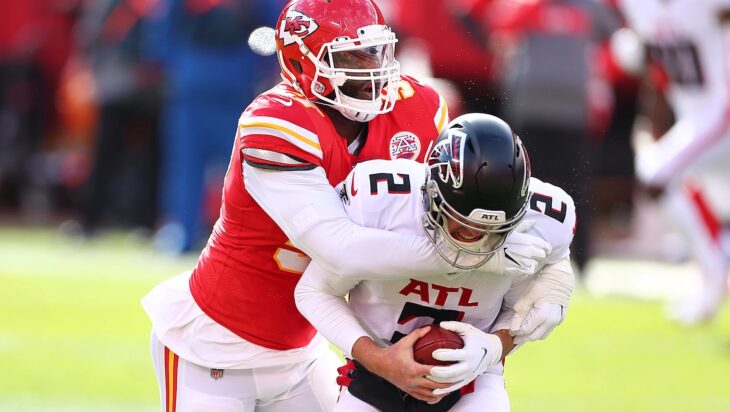 Chiefs general manager Brett Veach sought veteran depth along the offensive line during this offseason, and just days before the beginning of training camp he found the solution in a familiar face.

The club and defensive end Alex Okafor agreed to terms on a one-year deal Tuesday, reuniting the Chiefs with the 30-year-old edge rusher who spent the past two seasons with the team.

Terms of the deal were not immediately available. The team has also yet to announce a corresponding move to free an available spot on the 90-man roster.

The reunion with Okafor makes sense for both the Chiefs and the veteran. Kansas City sought a veteran defensive end, and the search included a visit earlier this offseason with free-agent Melvin Ingram.

With Ingram signing with the Steelers on Monday, the Chiefs bring back a savvy veteran comfortable with their defensive scheme and a leader in their locker room. Okafor lands in a familiar spot where he’s comfortable.

Okafor finished last season as a key contributor off the bench, playing 52 percent of the team’s defensive snaps during three postseason games. He actually played one more snap than Tanoh Kpassagnon, who started opposite Frank Clark along the line.

Okafor played 21 regular-season games for the Chiefs during the past two seasons. A torn pectoral muscle ended his season in December 2019, keeping him out of the team’s Super Bowl championship run. A hamstring limited Okafor to 11 games last season, continuing a common theme for Okafor much of his career. He’s played all 16 games in a regular-season just once in eight NFL seasons, averaging 11.1 gamers per campaign.

Chris Jones expected to take on a new role as an edge rusher opposite Clark this season, and the Chiefs invested a fifth-round pick on Mike Danna in 2020 and a fourth-round choice on Joshuah Kaindoh this year. With veteran Taco Charlton back for a second season in Kansas City, the Chiefs won’t likely expect Okafor to assume as large a role as he has the past two seasons.

How does this affect Frank Clark?

The addition of another veteran edge rusher naturally invites questions about the status of Clark, who was recently charged with felony possession of an assault weapon in California during March and is under investigation regarding a second weapons charge connected with a traffic stop in June.

While the Chiefs have yet to comment on Clark’s legal situation, the addition of Okafor doesn’t appear to be connected with the teammate’s off-the-field issues. The Chiefs were already in the market for a veteran defensive lineman, and Okafor isn’t expected to compete for a starting role at this point in his career.

Sorting out the depth chart

If Okafor successfully lands on the 53-man roster in Week 1, his victory will likely come at the expense of another defensive lineman.

While Okafor plays on the outside of the defensive line, his return could actually put a defensive tackle on the roster bubble. Jones, Clark and Kaindoh are sure-shots for the roster if healthy, and Danna and Charlton are also likely candidates. Derrick Nnadi, Jarran Reed and Tershawn Wharton fill out the top of the depth chart at tackle. That would likely leave just one open position on the defensive line.

That spot would likely go to a defensive tackle, with Khalen Saunders and Tyler Clark in the mix there. That scenario puts Okafor in competition with Tim Ward, Demone Harris and Austin Edwards if the Chiefs keep six defensive ends on the opening roster.