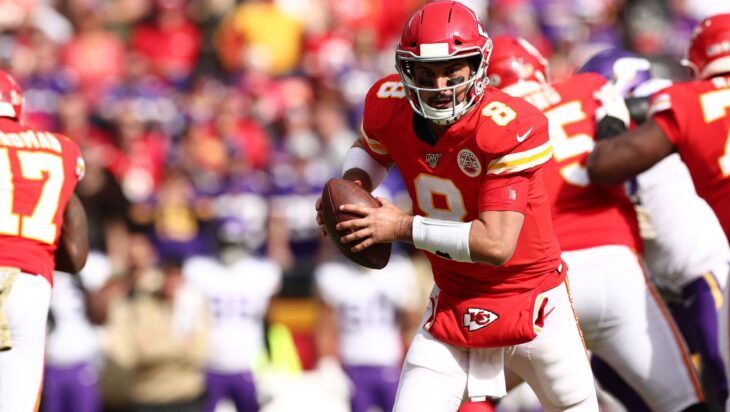 The Chiefs elevated quarterback Matt Moore from the practice squad on Saturday along with three other players as the club prepares to rest many of its starters while taking on the Los Angeles Chargers in the regular-season finale.

Moore will backup Chad Henne, whom head coach Andy Reid tabbed as the starter earlier this week in place of Patrick Mahomes. Moore performed well filling in for Mahomes last season, winning one of his two starts and completing 65 percent of his passes with four touchdowns and no interceptions for a passer rating of 100.9.

The club will likely make Mahomes one of its seven inactive players who will not dress for the final game of the regular season. On Friday the Chiefs ruled out five players for Sunday’s game: receivers Tyreek Hill and Sammy Watkins, running back Clyde-Edwards Helaire, right tackle Mike Remmers and linebacker Ben Niemann.

The Chiefs also elevated offensive guard Patrick Omameh and cornerback Deandre Baker from the practice squad from Sunday’s game. Moore and Omameh are standard elevations, while Baker is a COVID-19 replacement for linebacker Anthony Hitchens. All three players revert back to the practice squad on Monday.

The club also signed wide receiver Gehrig Dieter to the active roster from the practice squad. The Chiefs cleared roster space for Dieter by waiving tight end Ricky Seals-Jones. Seals-Jones played just two games for the Chiefs this season, dropping a pass on his only target with only 11 total snaps.

Dieter has played in nine games for the Chiefs over the past three seasons including three games this year. He’s primarily a special teams contributor but should see significant time on offense with both Hill and Watkins sitting out this week.

Omameh is an eight-year NFL veteran who signed with the team’s practice squad Dec. 26. He has 87 games under his belt including six starts while playing for six different teams, most recently for the Las Vegas Raiders. He has experience at both guard and tackle positions but has spent most of his career at guard. It wouldn’t be a surprise to see Omameh start at any of the four offensive line positions given his experience.

Earlier this week, the club designated linebacker Dorian O’Daniel to return from injured reserve but they did not activate him for Sunday’s game. O’Daniel will remain out until at least the postseason.